ML (one of the girls on the trip) and I were talking about taking another trip together, since we tend to travel together at least once a year! As we’re both budget-savvy travelers, we searched our options for the most affordable, but coolest, destination. And found Costa Rica, since June was the wet/rainy season. So, we gathered up a group of girls to take the trip with us, and were happy to end up planning with a group of 5!

I was expecting massive floods and torrential downpours every day that we were there, but not the case – even though we were in the middle of the rainy season (and hence why plane tickets were so cheap!) we barely needed our rainjackets. Once in a while, it would pour, but only in the afternoon and only for a few minutes.

We were only able to go to CR for 6 days (and didn’t stay for the weekends to make it 9 days, since the tickets were more expensive that way), but ML and I are masters of packing in as much as possible in as short of a time as possible (#bragalert). Much of the time was spent traveling from one city to the other- Costa Rica is a big country, and travel time is increased because of road conditions – but we felt like we were still able to pack in everything we wanted to do. We first flew into Liberia, the airport in the Guancaste region (instead of flying into San Jose, which would’ve been closer to Manuel Antonio Park, but oh well) and promptly were picked up by our first private shuttle driver ($175 for 5 people) to make the 3 hour drive to our first destination, Arenal Volcano. 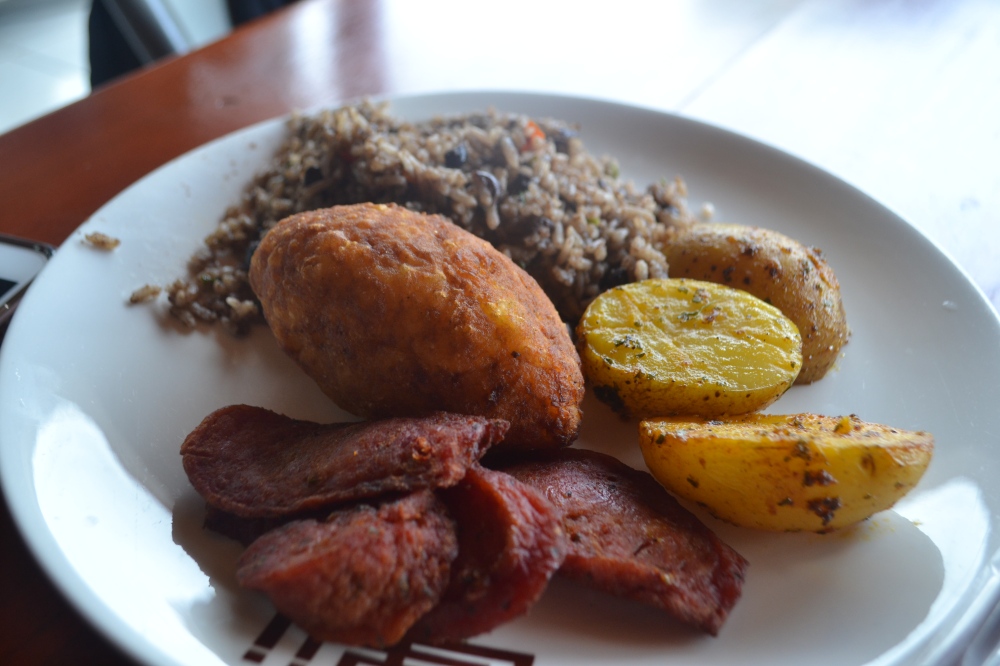 Arenal Volcano area is one of the major tourist attractions of Costa Rica, with much to do (although to be fair, the entire country is full of eco-tourism….it’s really one big adventure getaway). We stayed in the nearby La Fortuna town in a hostel ($16 pp, per night) where we shared a dorm with other girls but had access to hammocks and a nice little pool. Getting from one place to another required taxi drivers, who were generally very nice and eager to share their country with us. Warning: since Costa Rica’s economy runs mainly on tourism, things are not very cheap – they’re about the same price as in the US, and all parks require an entrance fee. No big deal, since we were happy to support the ecotourism of the country so that all the parks would remain untouched and beautiful. 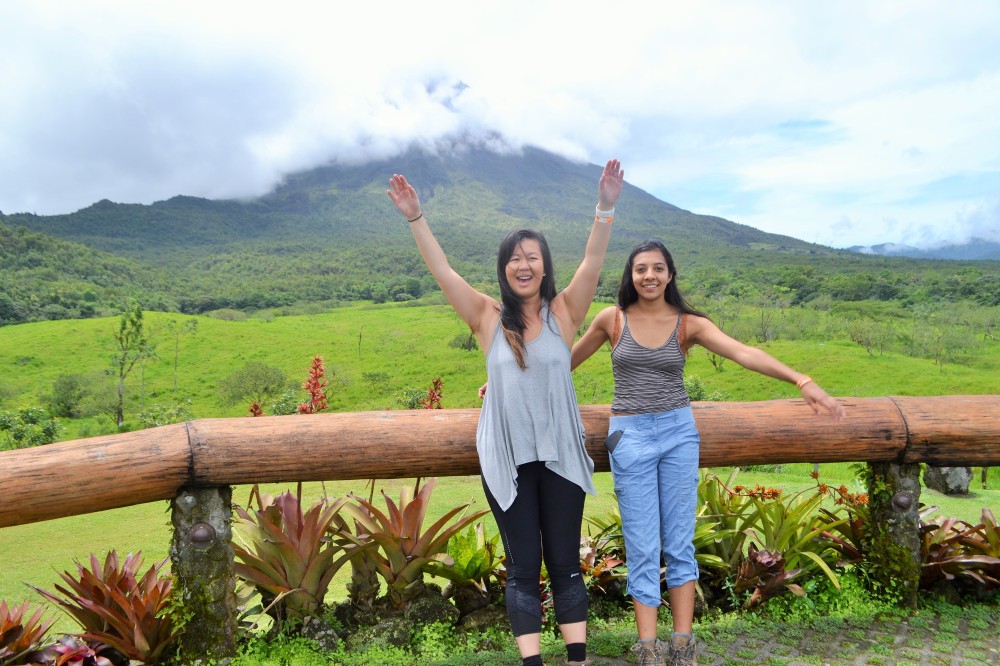 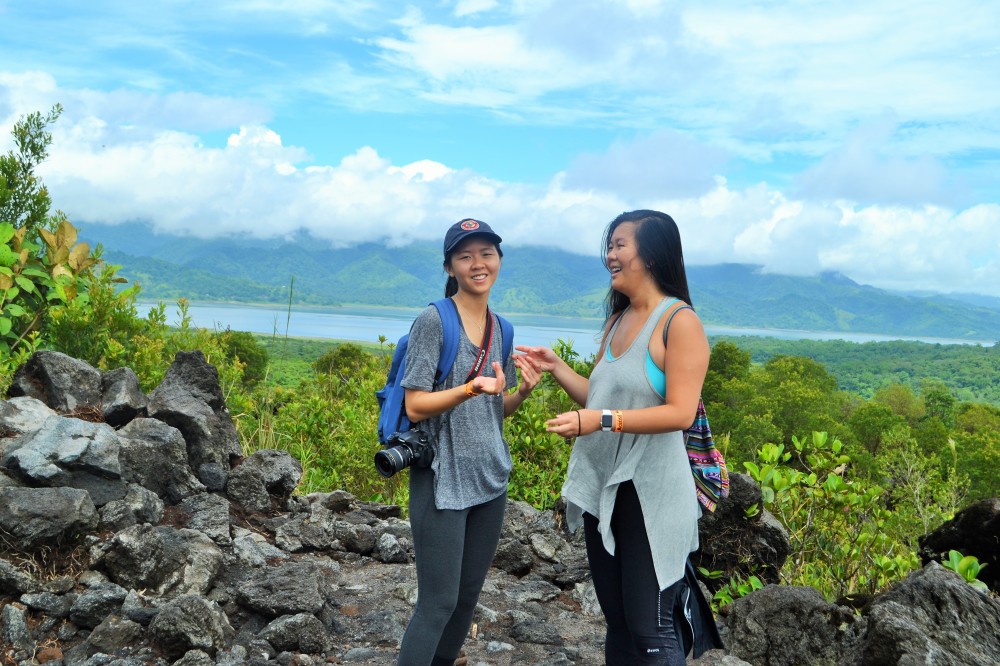 One of our first hikes was, of course, Arenal National Volcano ($10 admission)- one of the many active volcanoes of Costa Rica! We weren’t able to go all the way to the top (obviously), but had a great time hiking the lava fields. We didn’t hire a tour guide, but perhaps that would’ve been a good idea as we found out there was much hidden wildlife all around us. But we survived! And on our way back, our taxi driver showed us a sloth mother and her baby sloth – and it waved at us! 🙂 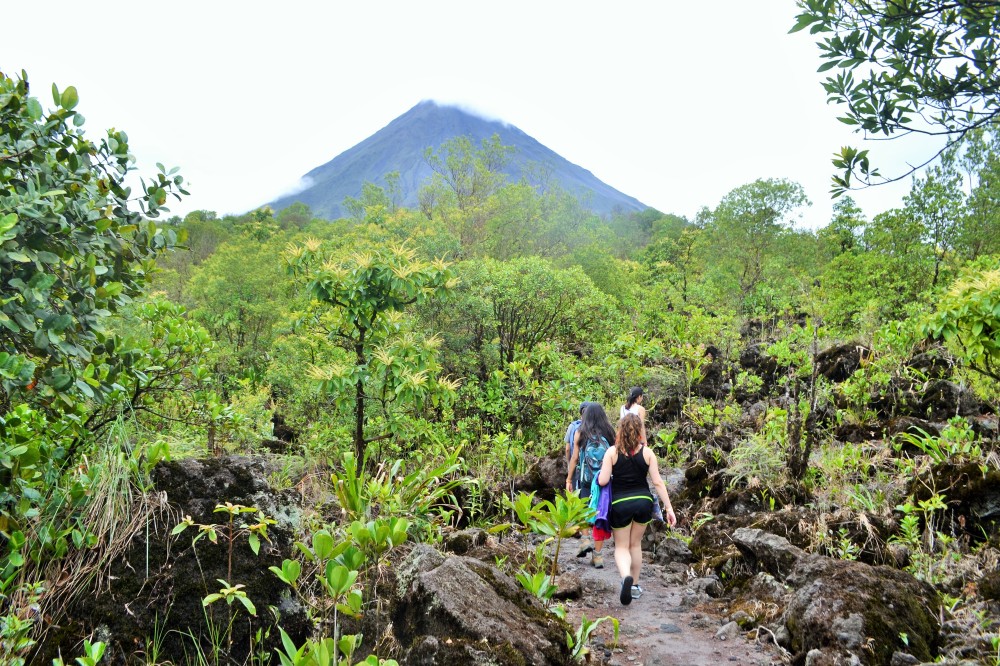 Food is generally very clean here. I preferred eating at the “sodas”, which are basically hole-in-the-wall convenience restaurants that only sell “casados” (lunch of rice, beans, some vegetables, plantains, and meat) and are generally $5-$7 for a very filling plate. However, we diversified our meals a big and ate at all kinds of places – below is one of the restaurants our taxi driver recommended. Juices were SO fresh everywhere! 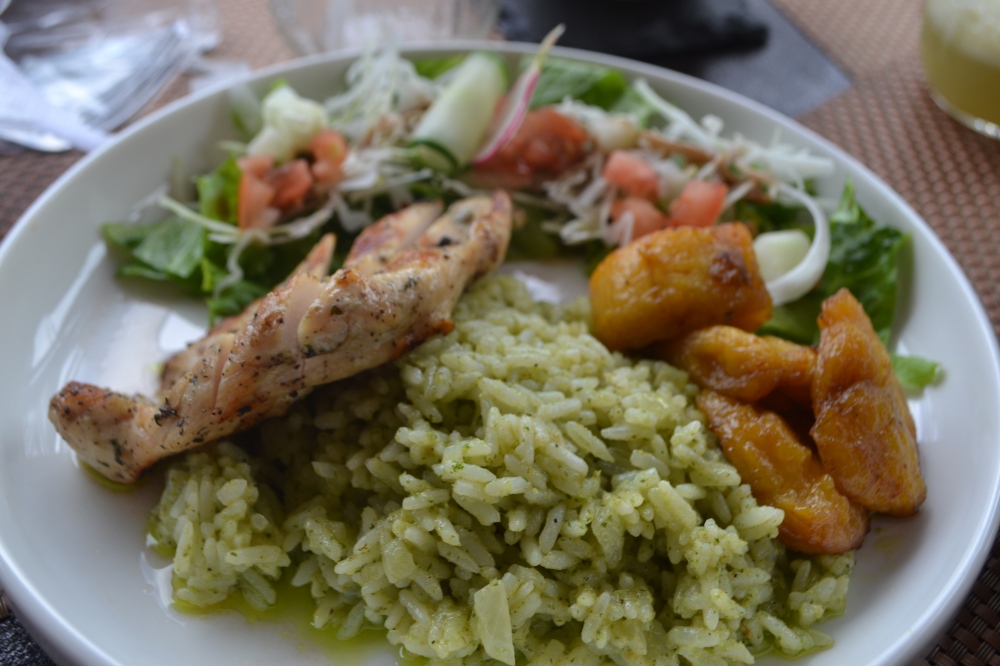 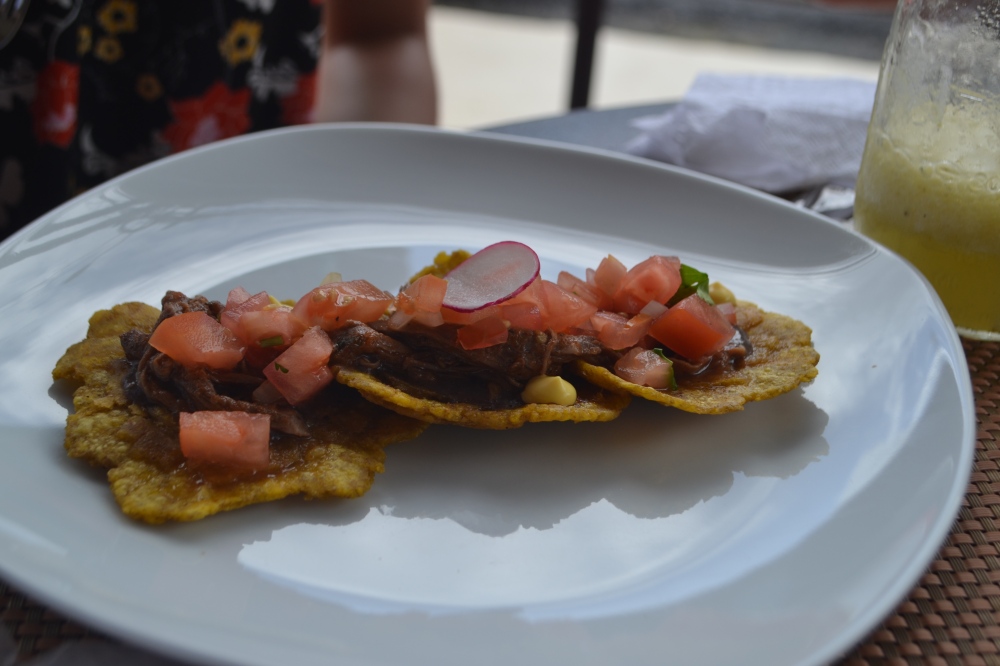 We also visited La Fortuna waterfall ($14 entrance), which was a bit more touristy, but still great to see. 471 steps down to the waterfall in the thunderstorm, where we then played in the freezing waterfall until we decided to make the 471 steps up back to the car. 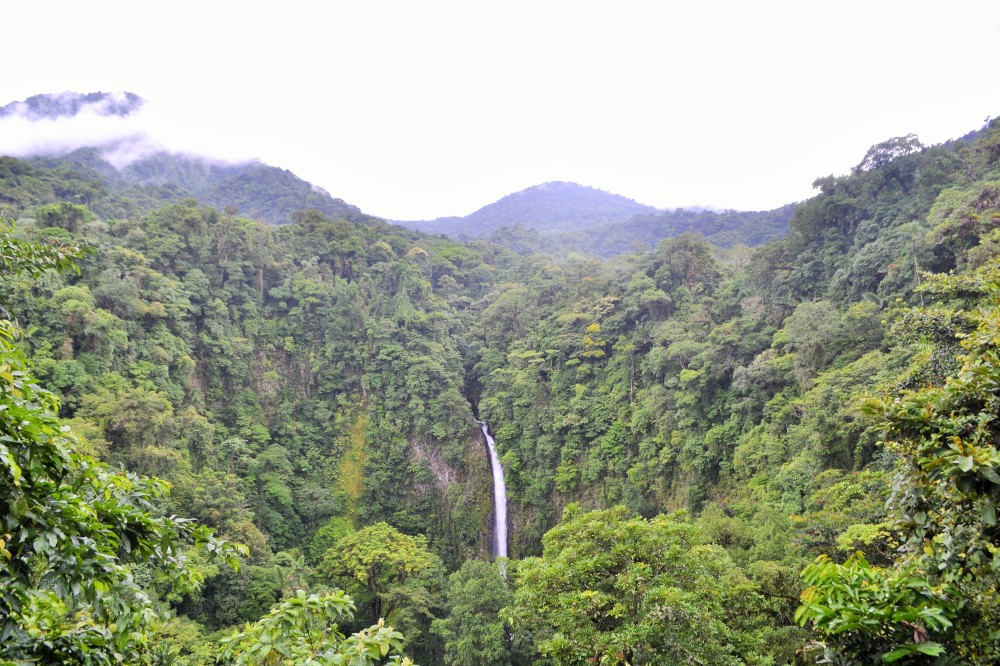 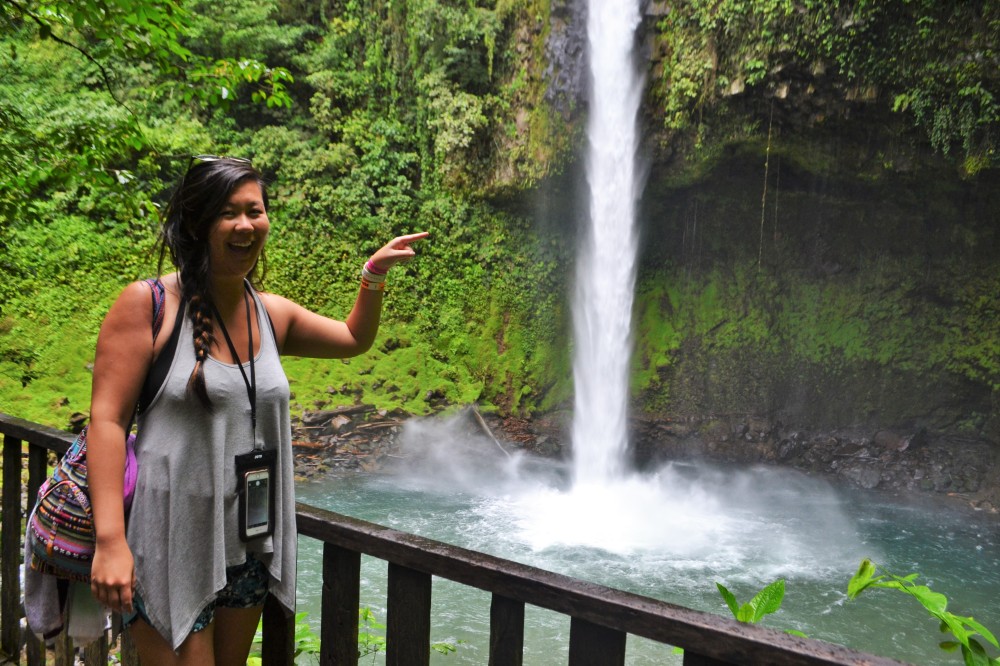 On our way back, we stopped by the free hot springs to relax for a few hours. La Fortuna had many different commercial hot springs for very expensive entrance fees ($50 ish), but we found these natural, untouched hot springs that were powered by Arenal Volcano’s lava off the side of the road. 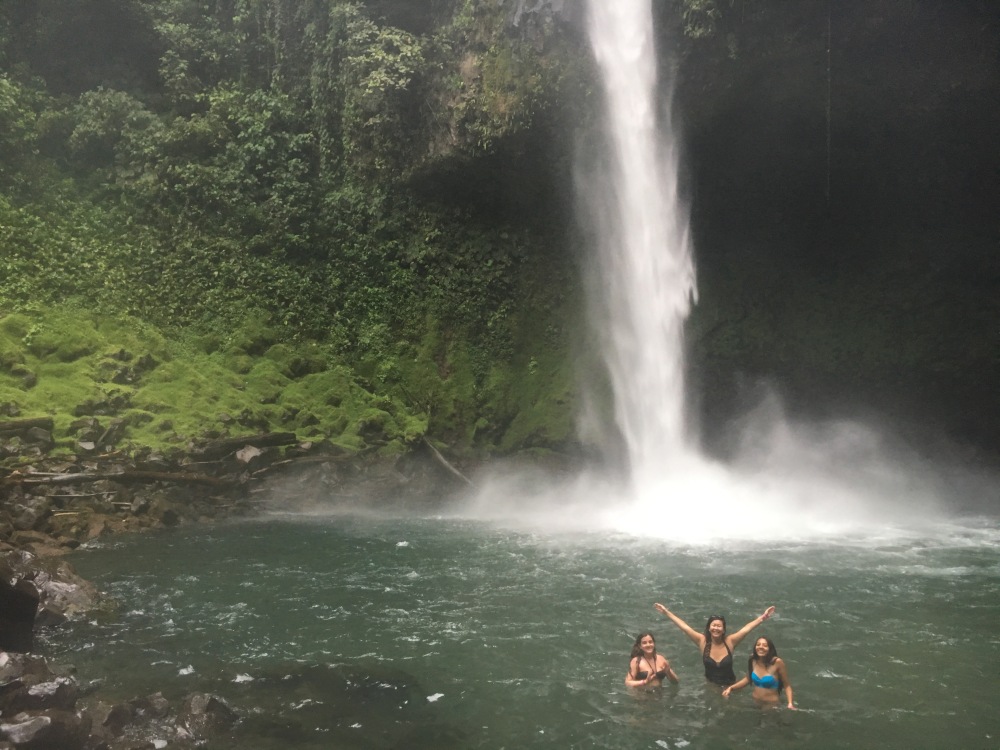 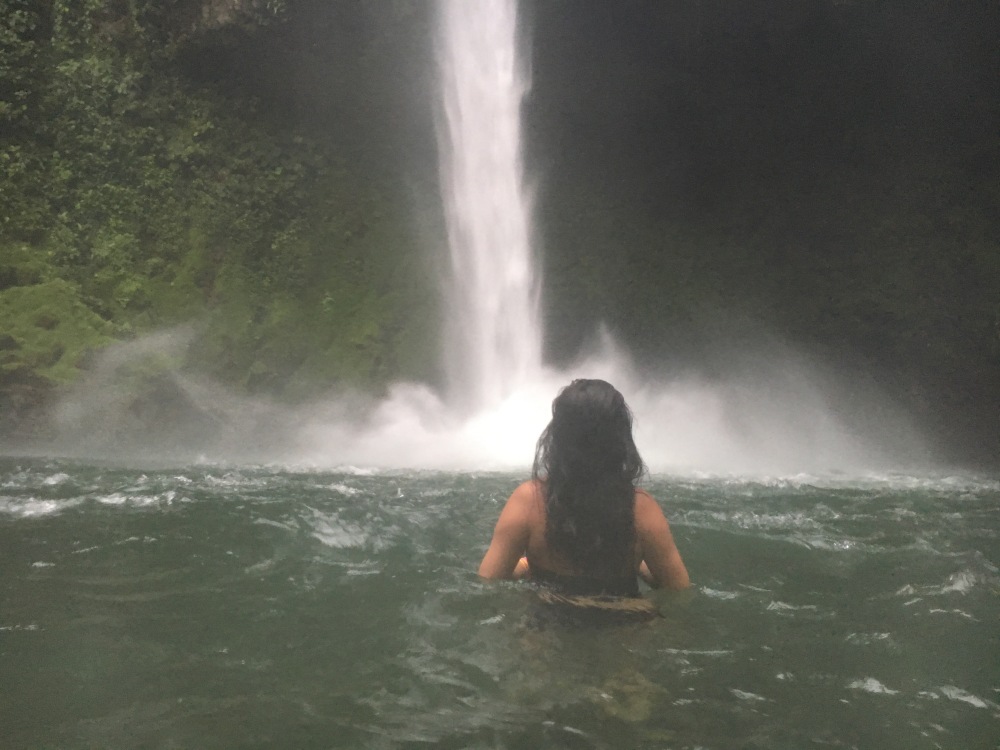 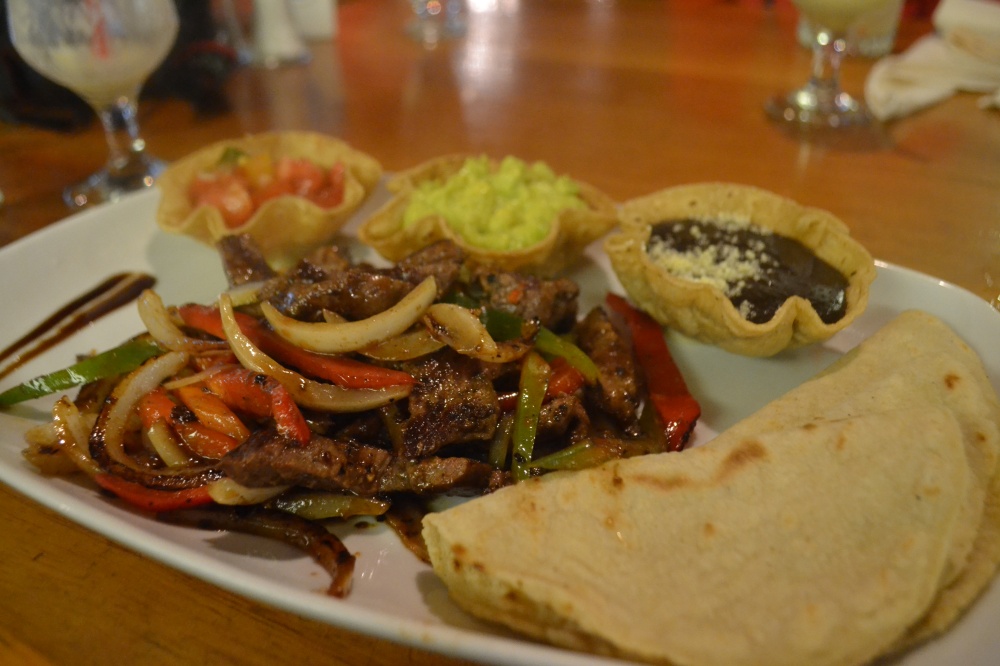 After a few days in Arenal, we began the next leg of our trip – Monteverde Cloud Forest. This required a taxi-boat-taxi ($25, but much faster than just a shuttle which would’ve taken 5 hours), which conveniently picked us up at our hostel at 8 AM and then dropped us off to our waiting boat at Lake Arenal. The last leg of the trip was brutal, as the roads to Monteverde were unpaved, but at least we had some great views of the cloud forest. 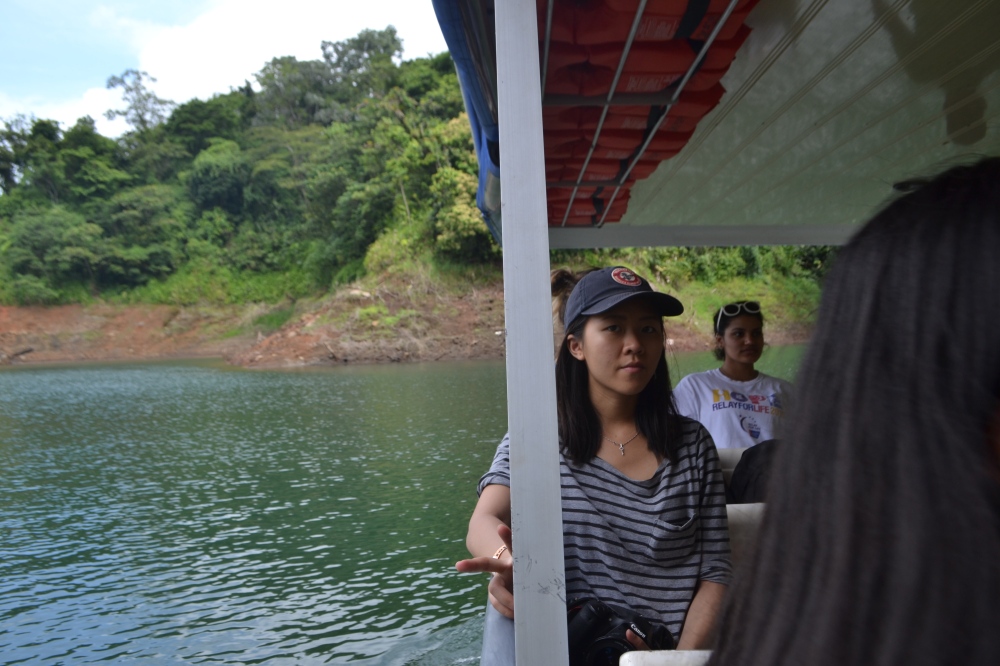 Monteverde is a true adverturer’s dream. In the next few days, we completed a hanging bridges tour (by Adventura company), hiked through the cloud forest and watched a thunderstorm pass through us, went horseback riding into the sunset, and, my favorite part – ziplined ABOVE the cloud forest. I wish I had a GoPro at the time to document exactly how magical it was, but it was literally like I was flying. (Plus, we met some pretty cool people at our hostel too! Highly recommend hostel life when traveling outside the country, especially in small groups – you get to meet so many cool people, even if you do have to share a room with them and usually don’t have air conditioning or hot showers….!) Also, shoutout to our hostel, Santa Elena Hostel, who helped us book all our tours very last minute! The front desk is SO helpful, and you can definitely tell that they are passionate about their work!

“My happiest day was in Monteverde, when we went ziplining in the morning, hiking in the afternoon, and horseback riding in the evening. Something about ending the day with riding into the sunset to a gorgeous backdrop of Costa Rica gave me all sorts of highs.” – ML 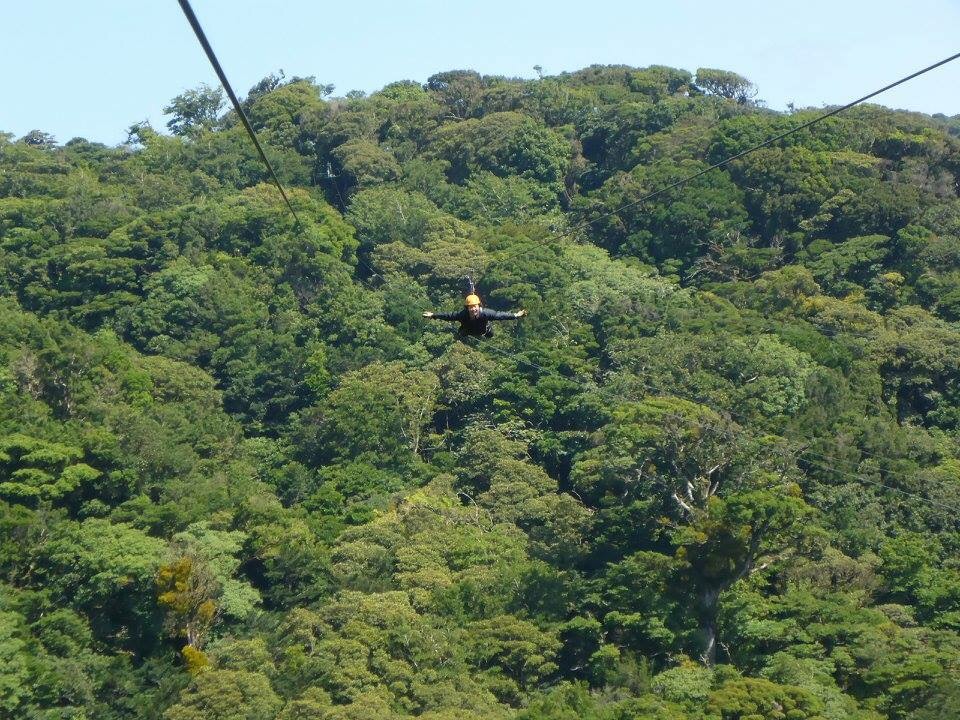 literally flying above the clouds

“My favorite part about Costa Rica was flying higher than the birds in a zip line activity called the “superman”. You really do feel like the Superman or a bird because you’re being held only by a cable that’s attached to your back so your arms and feet are free. It was amazing. It was an experience/feeling that I can’t even describe with words. I think I even cried a little during; I don’t know if they were tears of joy or fear or just the wind hitting my face. Also horseback riding in a forest during sunset was a close second. I loved my horse Pinto <3. He was a little old and tired but he did a great job carrying me around :P” – BH 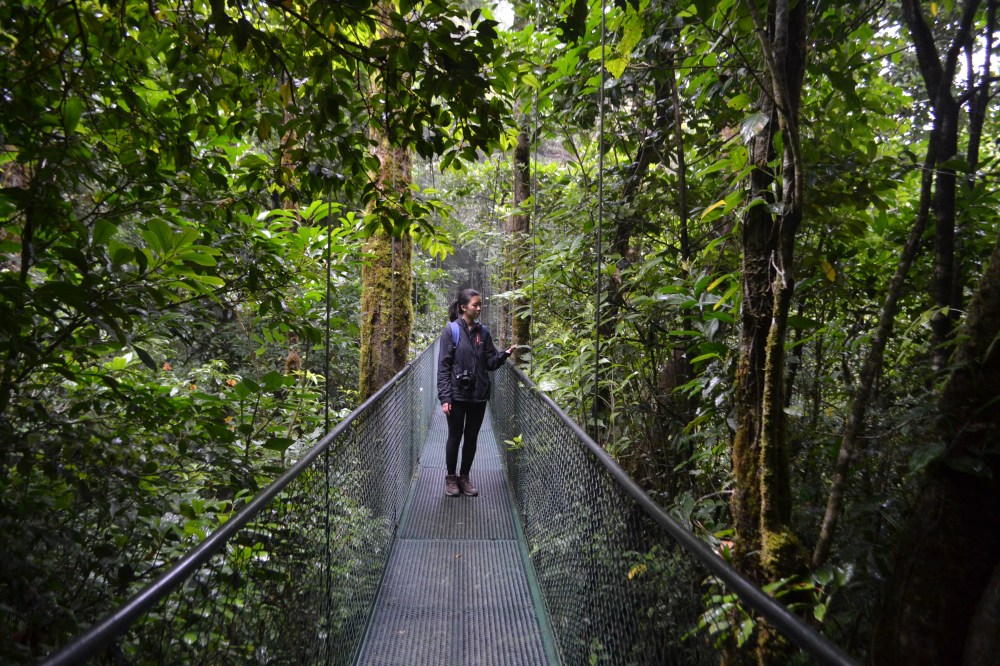 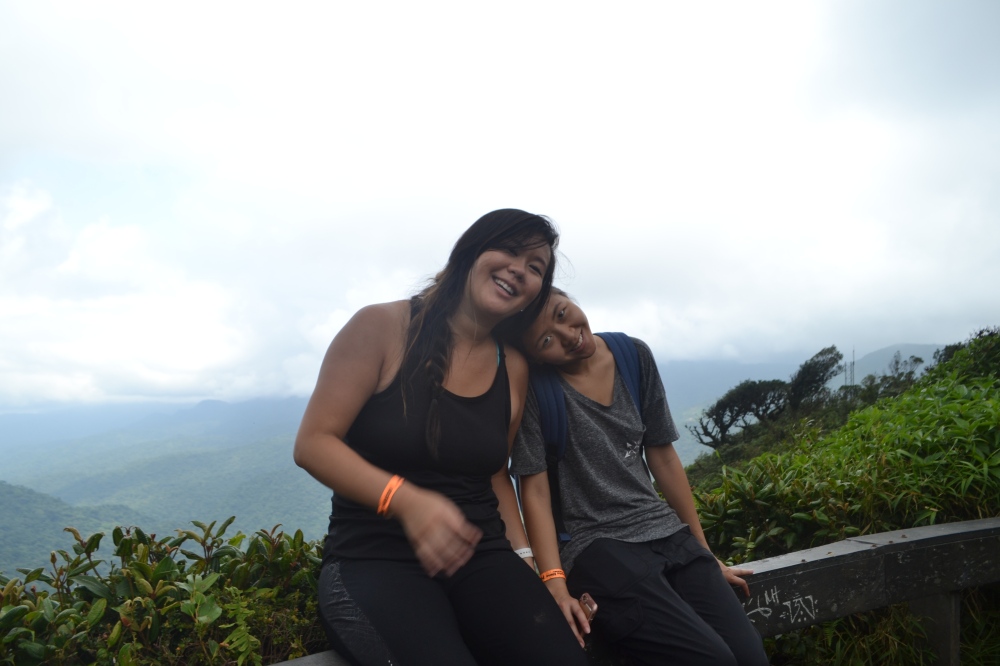 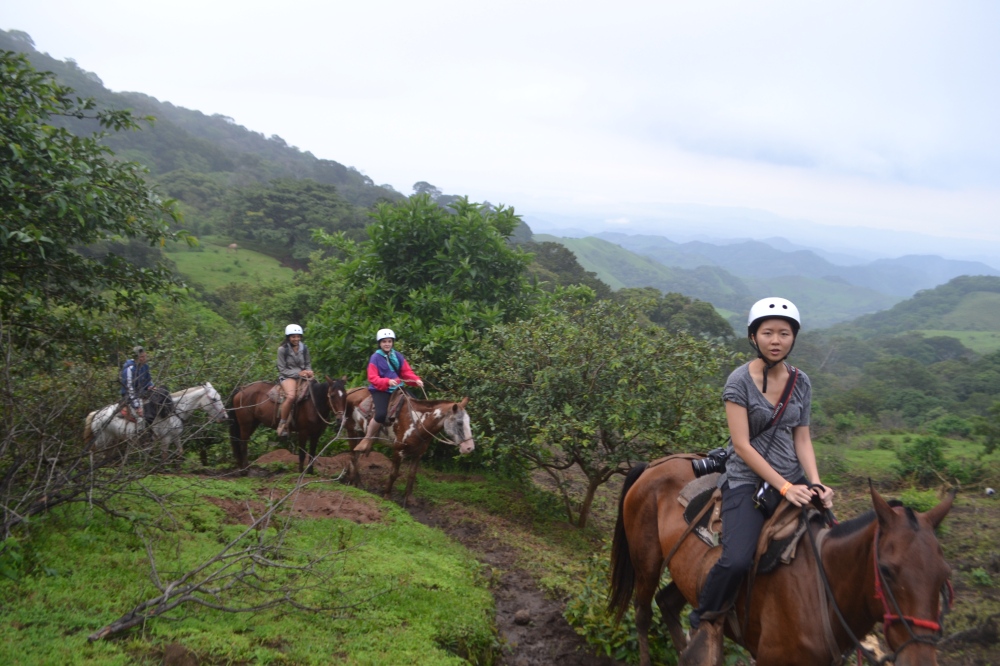 After an adrenaline-packed few days, we headed three hours north back near Liberia to spend the last day and a half relaxing on the beach. This was probably my least favorite part as the beaches are made of volcanic sand…and Costa Rica to me means ADVENTURE instead of vegging out on a beach, but it was nevertheless a pleasantly calm ending to our trip.

I think we underestimated how remarkable our trip was….to many people, this would be the trip of a lifetime (or even a honeymoon destination!). We had so many wonderful experiences, truly experienced so many adrenaline-packed, nature adventures, and…lived for a week getting bitten by mosquitoes and without AC or hot water! We seriously roughed it for a few days out there – I wasn’t sure how the whole group would hold up, but WE DID IT! I hearby give the title of “best affordable adventurists” to US! 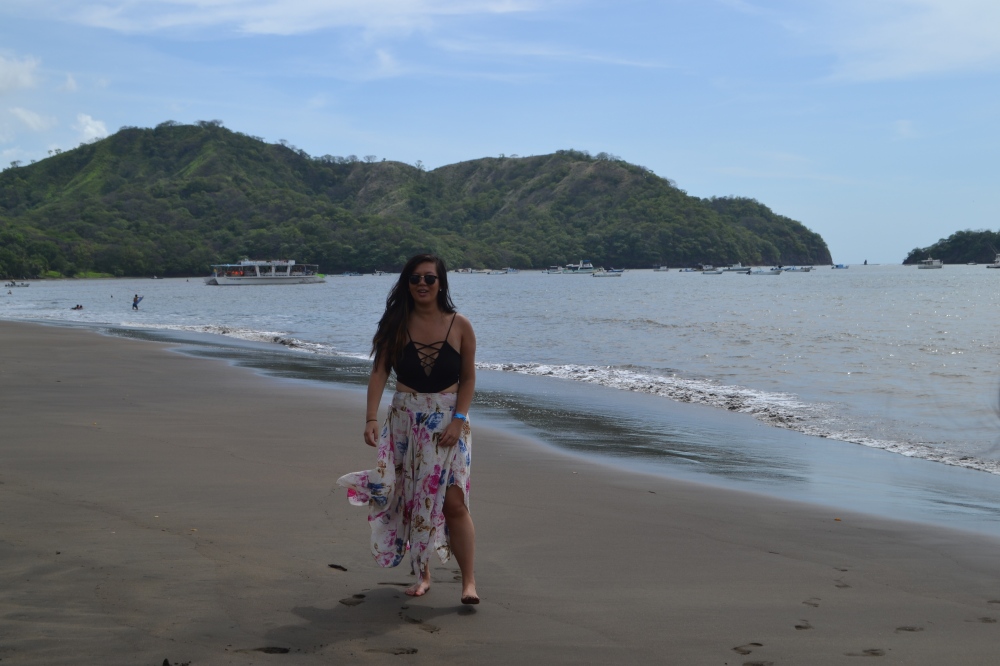 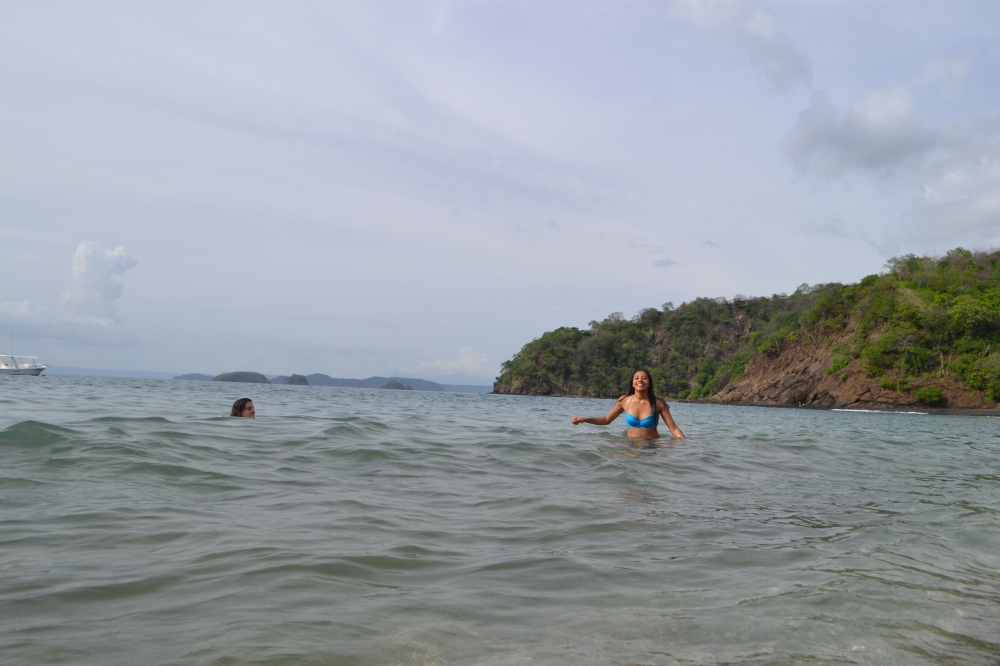 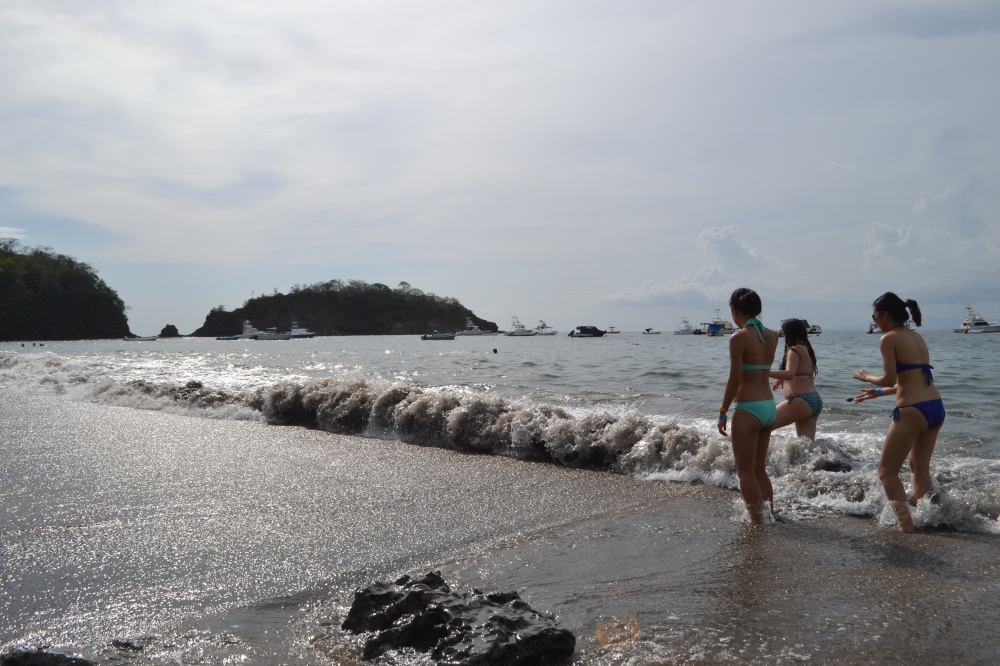 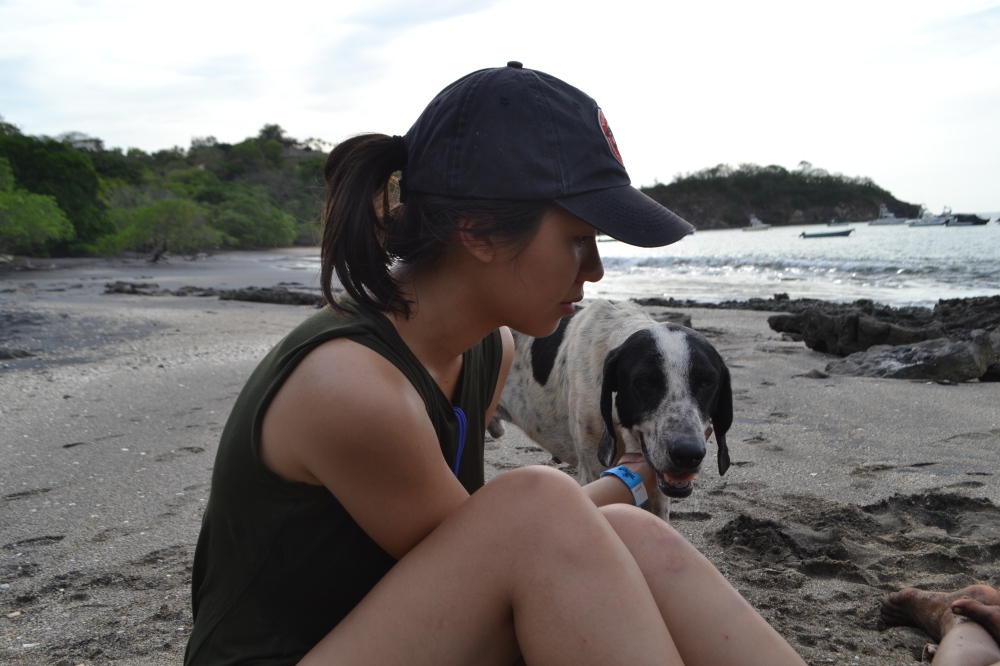 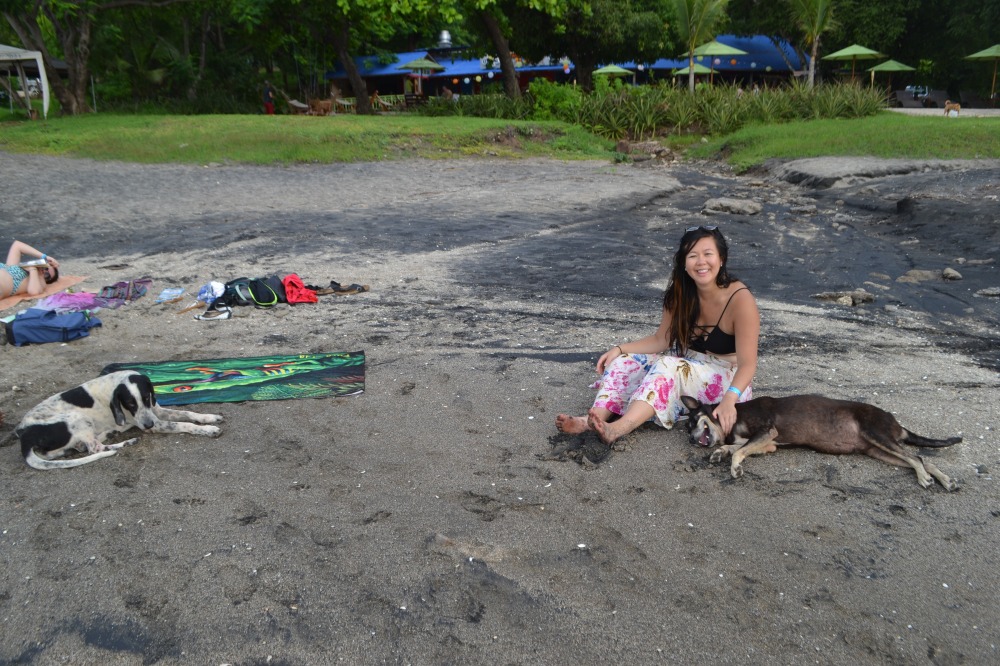 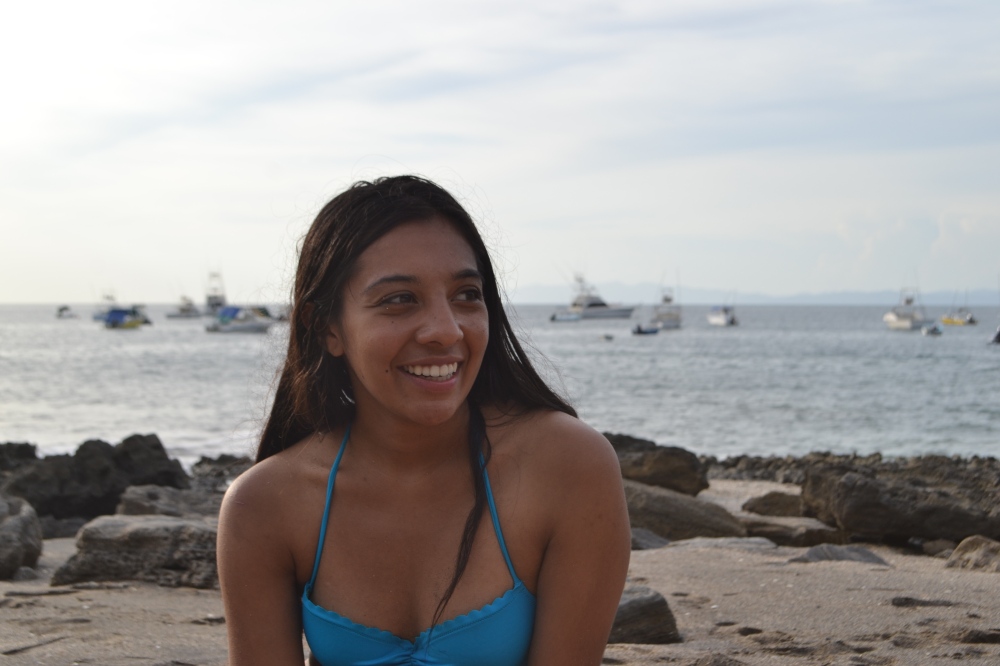 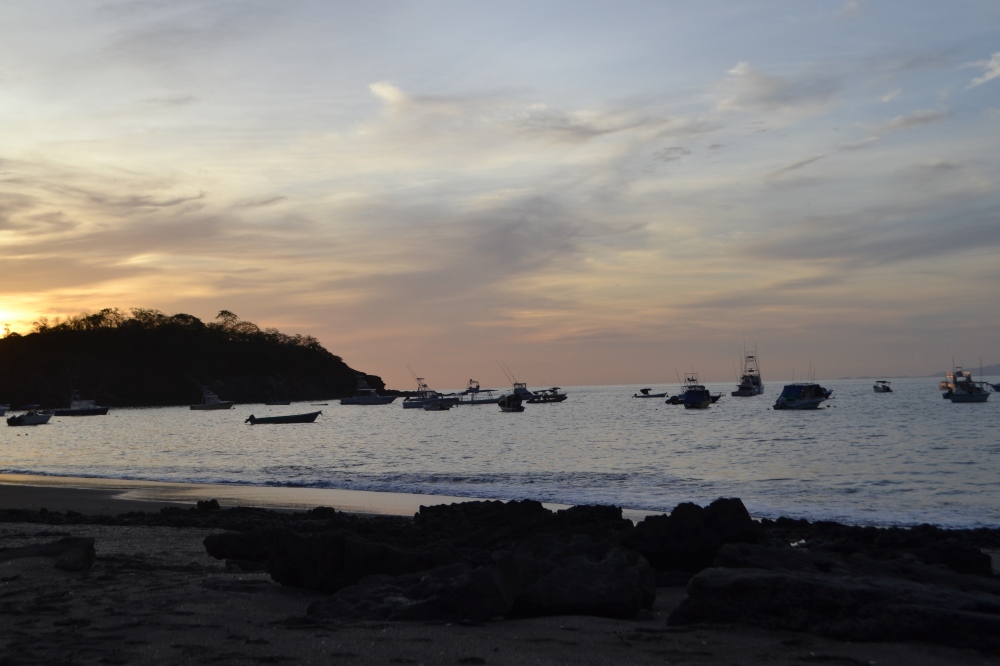