Once again, I am delinquent on my blog posts, and I am hustling to finish all the ones from last month’s Asia trip before my next trip this Friday (ah!). 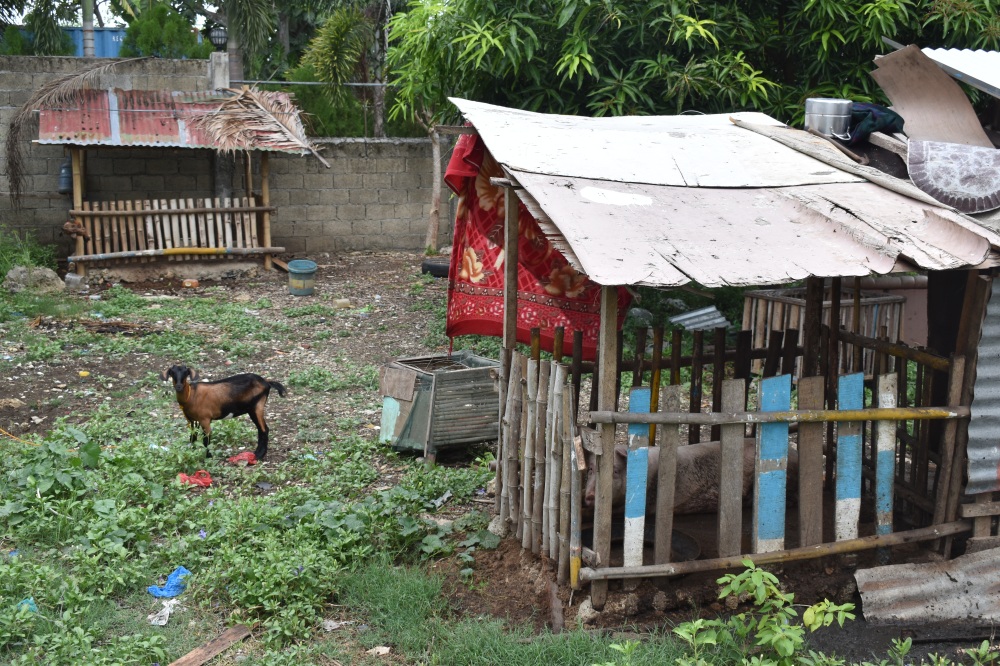 I officially started funemployment this past Monday evening, and have not gotten my last paycheck yet so I’m sure I will feel my changed financial situation on the last day of the month – so far it hasn’t felt any different. Plus I have been pretty productive the last few days with doing a mandatory pre-MBA summer course that I’d been putting off until now, and studying for some exemption exams. Now that I have time for myself, I’m also focusing on working out consistently and making healthy food to eat. I’m sure it’ll get messed up when I start traveling again, but for now, these few days have been great doing things at my own pace, and still having the time to hang out with people after they get off of work. 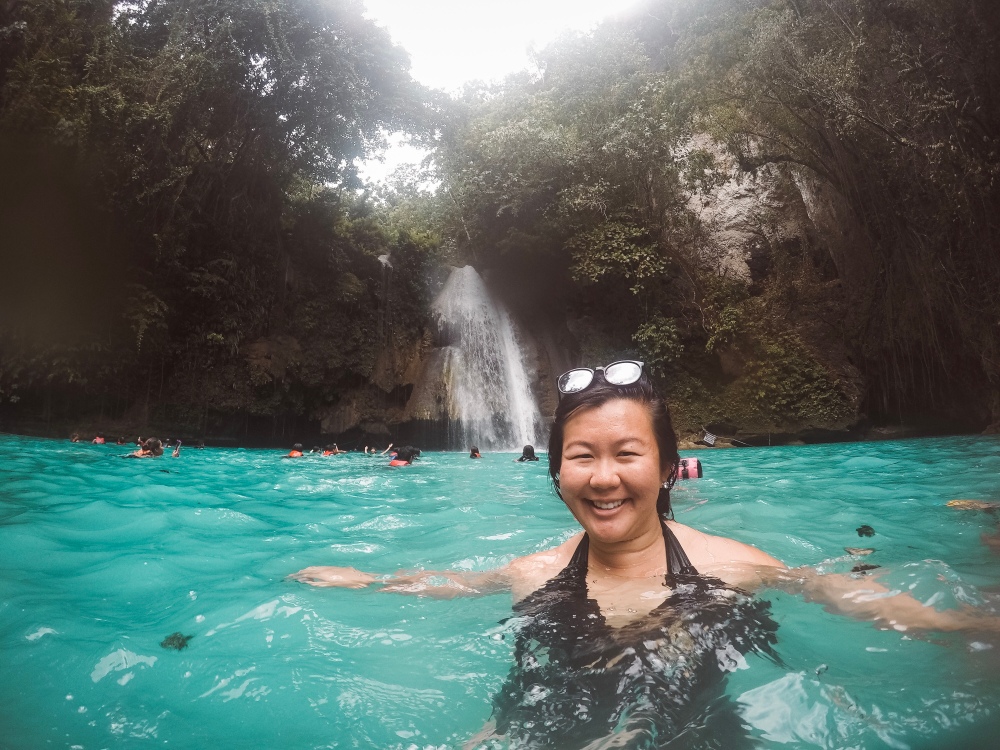 I’m supposed to be studying now, but as many of you know, I’m a horrible student, so to feel productive and get the juices flowing I’m writing this blogpost about my ~solo trip~ to Cebu, Philippines! After my long weekend in Taiwan, I knew I had a few days before meeting up with M in China, and I wanted to go somewhere affordable but also new in Asia, so I found cheap flights to the Philippines. I knew I was going to be a bit tired by this point, so I decided not to hop multiple flights over to Palawan or Boracay, and tried to keep it as affordable as possible. I was a bit apprehensive about this solo trip; not because of any safety issues or worries about getting around, but because I love being with people and always have a better time with someone else with me (plus, it’s nice having someone take photos of me!) I feel like it would’ve been easier for me to take a solo trip to a proper city, where one could easily walk around by oneself, rather than a nature destination where many excursions require transportation or hiking. 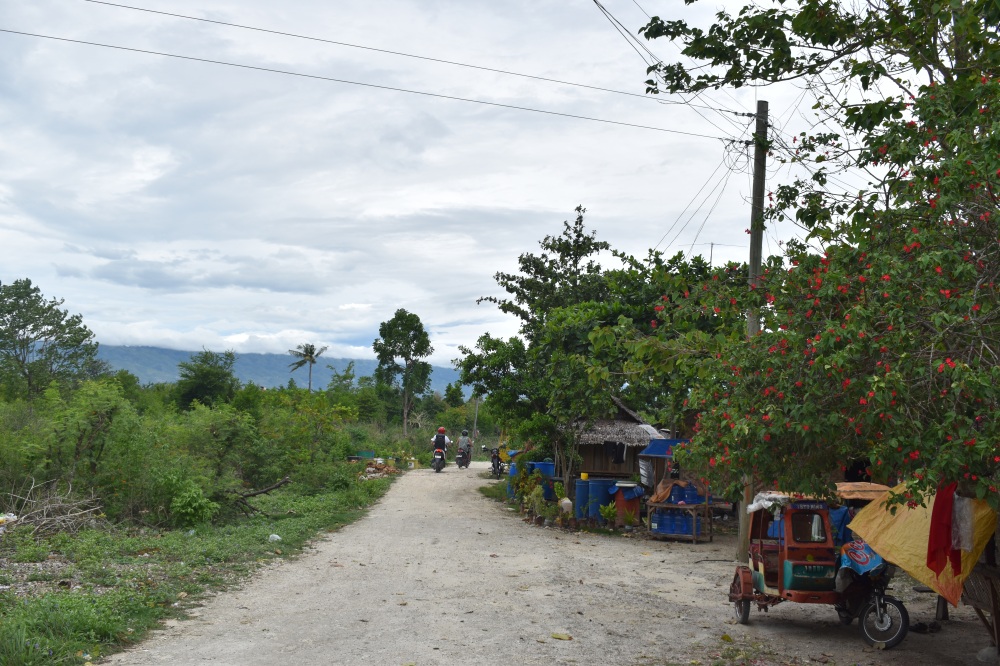 I think the best friendships are made in hostels when solo travelling, but I realized that I’m a bit past the hostel age at this point. I stayed in a decent hostel in Cebu City my first night after getting into the country from Taiwan, and figured I would be there relatively late enough where it wouldn’t matter. I must admit, while I don’t mind staying in bunk beds with other people (especially in female-only dorms), the thin sheet, lack of towels, weird shady lights, and spotty internet really got to me.  I was really glad I was only staying there for a quick night!

The next morning I took a public bus down to Moalboal, where all the diving is centralized around. Taxis are quite cheap, probably only around $3 to get to the South Bus Terminal, where I caught the public bus for only $2.50 for a 4 hour drive. It was definitely an experience – it was even un-airconditioned (I didn’t want to wait an extra hour for the air-conditioned bus to show up, although it would’ve only cost a few pesos more). Just tell the bus driver where you want to get off (they’ll probably ask if you look like a foreigner – there were very few foreigners on the bus, and they all got off at the same place I did).

Once I was dropped off in Moalboal, I still had to get to my dive resort by the beach. I was swarmed by people offering their trikes – I think I definitely got taken advantage of here, because each subsequent trip throughout my time in the area cost less and less. I eventually took a trike (tricycle) to my resort by White Sand Beach, rather than a motorbike, because I had a suitcase to carry. 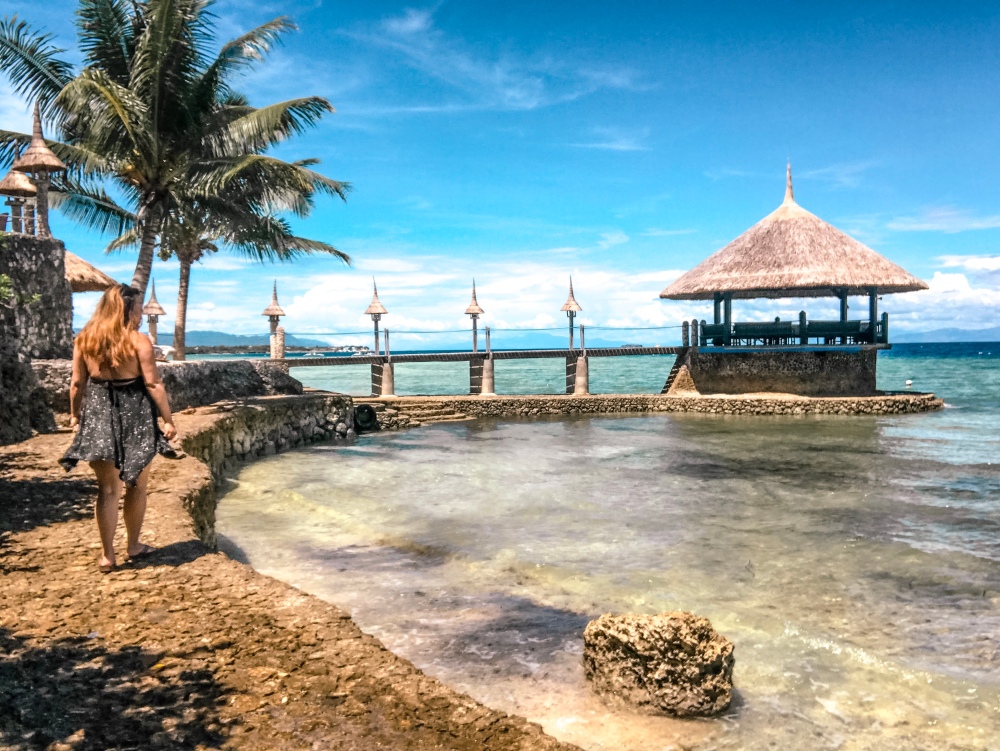 I liked my resort, but I realized that Panagsama Beach area is a better place to stay. I had to walk 10-15 minutes to White Sand Beach, which was nice but really didn’t have any amenities. Panagsama Beach area isn’t a true beach, but more of rocky shoreline where you can go sardine diving. This is where I spent most of my days, both diving and snorkeling to see the sardine runs. The area around the beach is lined with little shops, massage parlors, and restaurants – perfect for a solo traveler who just wants to walk around. I got some great massages here ; 2 hours for only $12, full body! 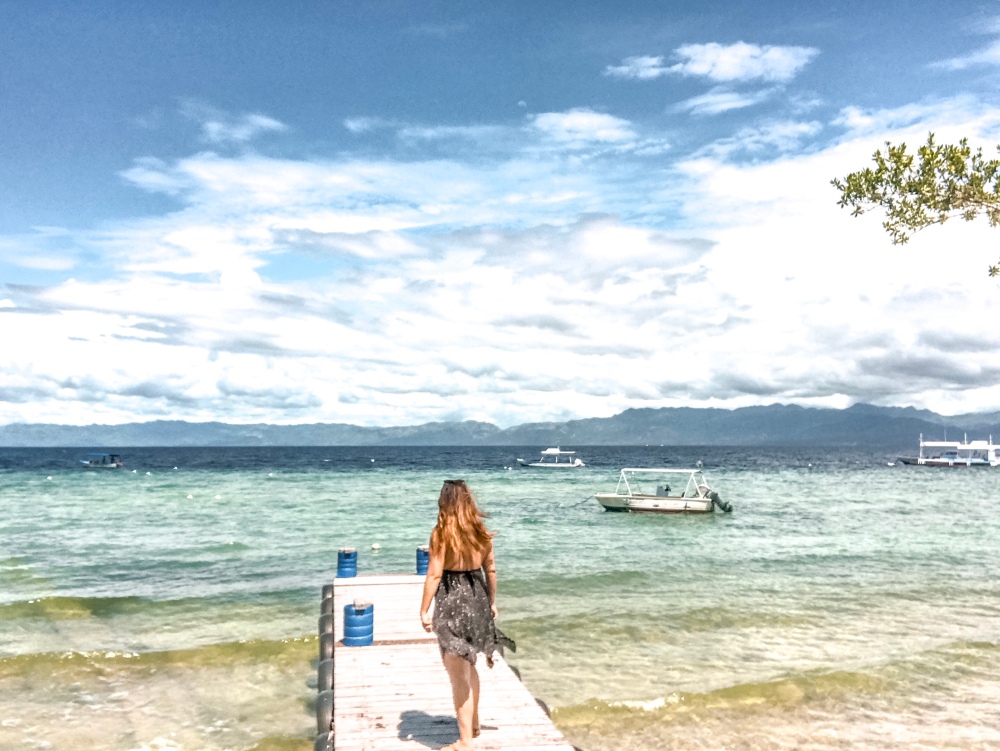 I did eventually rent a motorbike to get me around easier, rather than to rely on men who drove trikes or bikes…but then it broke down! The woes of traveling alone.

The sardine runs were super cool. You can also see them snorkeling just off the coast, and rent gear for only $5. Most people were traveling as couples or pairs, so I didn’t get to meet very many people to hang out with in my spare time, but I didn’t mind that much. The food was just okay as well, although cheap. 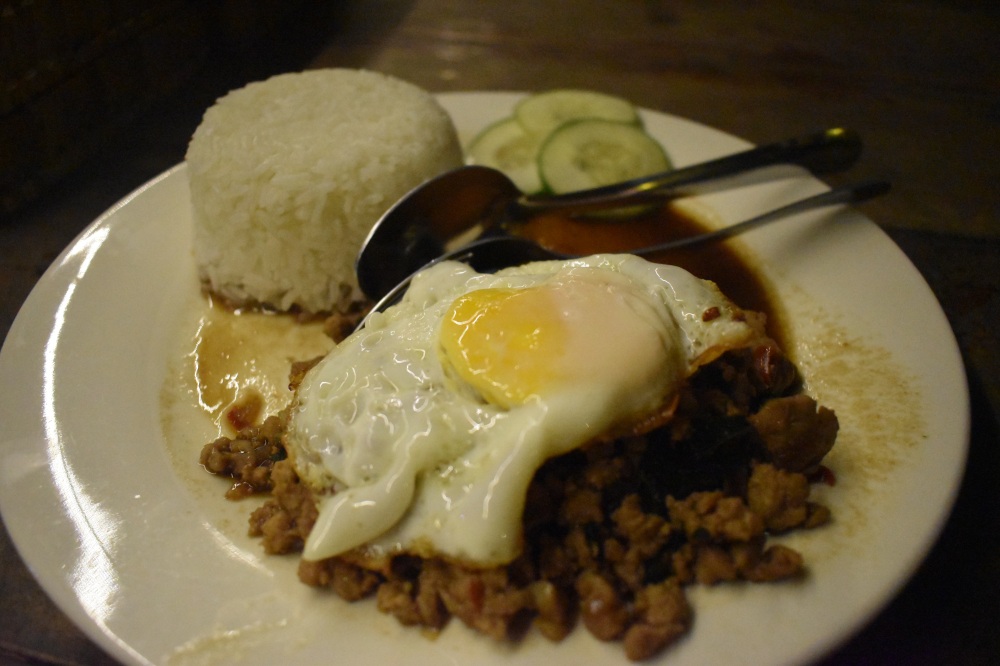 One day I took the public bus (again) down 1 hour south to Kawasan Falls. The trip is very easy to do on your own; take the same bus as you take from Cebu, and get off when the driver tells you. Then it’s a quick hike to the falls, pay $0.20 for admission, and spend some time hanging out at the waterfall. Many people go canyoneering here, but since I was alone I didn’t want to join a group on my own – but I still had fun swimming around the waterfall and seeing the super blue water. 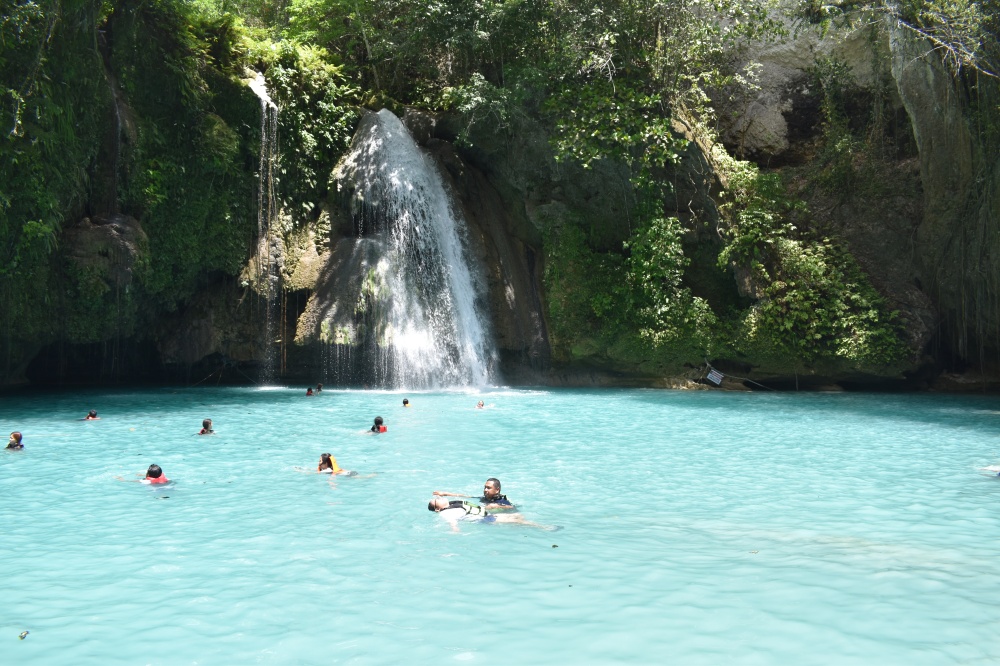 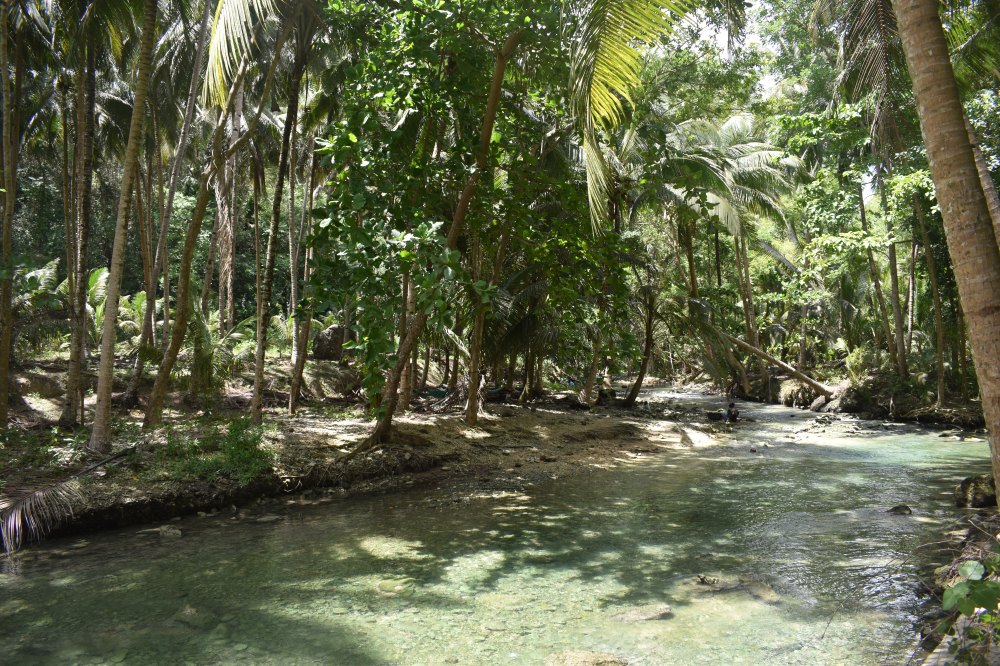 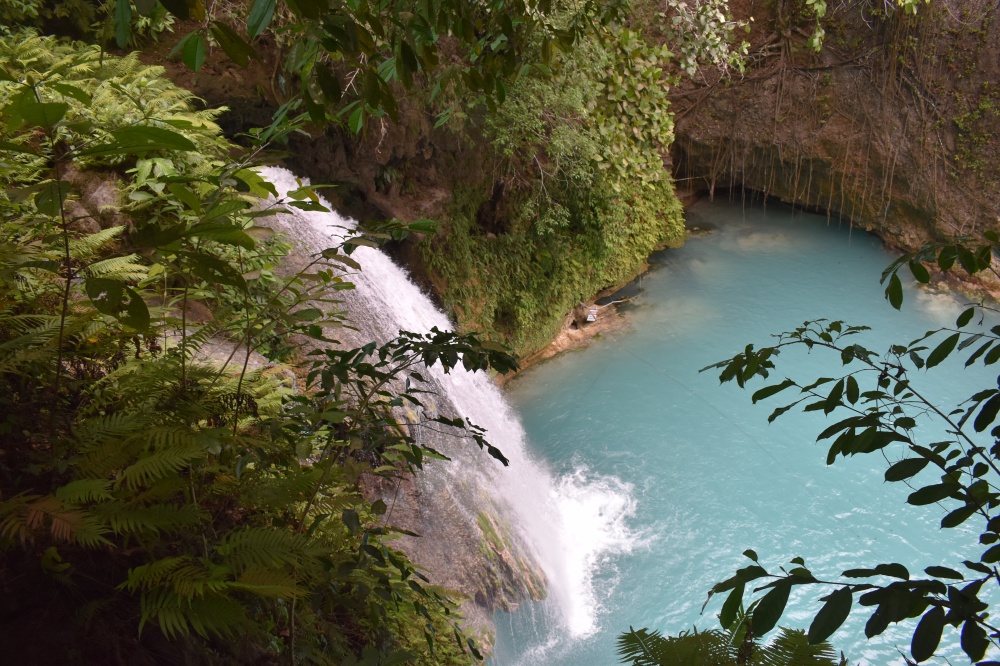 I’d originally intended on staying at my dive resort for 3 days – it ended up being more of a hostel, with no pool but a decent beach view, so I decided to take the bus back early and get a hotel with proper internet to plan my China trip before the internet was banned there. I had some good lechon (roasted pork) at the House of Lechon, but the next day was monsooning so I just chilled around my hotel area.

Overall, I really enjoyed diving for a few days. I ended up not diving with whale sharks since I looked into it and it seemed pretty environmentally unfriendly (they feed the whale sharks, so they’re not actually wild!), so I’ll just have to save a true whale shark dive for M someday. I wasn’t the biggest fan of Cebu itself, as the city was pretty chaotic, but I’d love to return to Palawan someday!