As work settles in and the excitement of starting a new [adult] life wears out, one must respond to the lack of spring and summer breaks with VACATION TIME. Yes, it was a little scary requesting my first long-term vacation that isn’t part of a holiday, especially when I just started, but I was lucky enough to have a great and flexible manager! So I’ve been looking to this mini-spring break since January.

With bonus sign up points from credit cards the ticket ended up being a free $400 plane ticket anyway- yikes! It was obvious after arriving to the airport that Easter week was a very popular time for families to take their kids to Sanibel. Go during non-peak times). We stayed at a nice Marriott suite that was quick driving distance from Sanibel, and only a 3 min drive from Bunche Beach, where I promptly got my first sunburn after only a few hours.

We visited Sanibel Island the next day. The island runs east-west while most others run north-south, which means it collects many, many shells throughout the day. So many shells! The beach itself was beautiful, and the water so clear. We had a wonderful time playing with the kids…I almost forgot how much I love taking some time to simply bake in the sun rather than running around all day!

After a morning of relaxing beach time, a wonderful BBQ lunch, and plenty of wine, we were off to run around once more! More than half of Sanibel is comprised of wildlife refuges, so we biked the short mile to Ding Darling National Preserve in hopes of finding some gators. We rented kayaks and looped around the wildlife trail… No gators, but a lot of jumping fish and sea birds that we were able to get very close to!

My other favorite part of the trip was visiting the Everglades, which were only 1.5 hours away from where we were staying. After a lovely waterfront lunch at the historic Rod & Gun Club, we drove through endless miles of open land to arrive at Shark Valley. We arrived a bit too late and couldn’t reserve a tram ride, but thunder cancelled the ride anyway so we didn’t miss out too much. Instead, we rented bikes for an hour and rode through part of the trail. The entire loop was 15 miles and supposed to take 2-3 hours, so we only did part of it before we had to return the bikes for the day. There were SO many gators just lying around on the path and in the water! Most were just sunbathing and looked very peaceful, but silly tourists were still getting much too close to them to take photos (I, on the other hand, kept my distance. I can’t sprint worth anything!). It was quite beautiful riding through an eminent thunderstorm, especially when we got to open swampland and could see the lightening in the distance. We were able to see blue birds, ravens, herons, butterflies, 15+ gators, and many other swamp birds up close! Very sad I didn’t bring my DSLR with me (I’m trying to get it fixed soon).

Because of a flight delay, we were also able to squeeze in a tour of the Edison and Ford Winter Estates. So much fascinating botany from around the world, and so many lessons about two of America’s greatest innovators! These were their winter homes, and both tried to develop a feasible American rubber plant. Cooperation at its finest.

seaview from the winter estates

one of many interesting international orchids 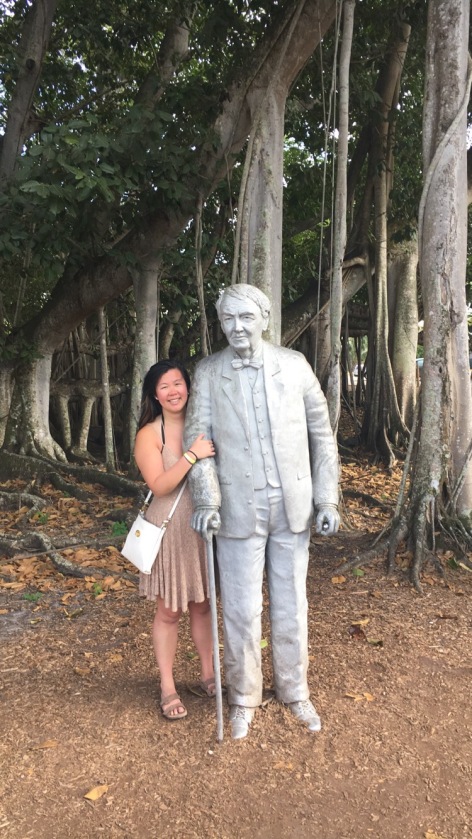 with Mr. Edison himself! 😉 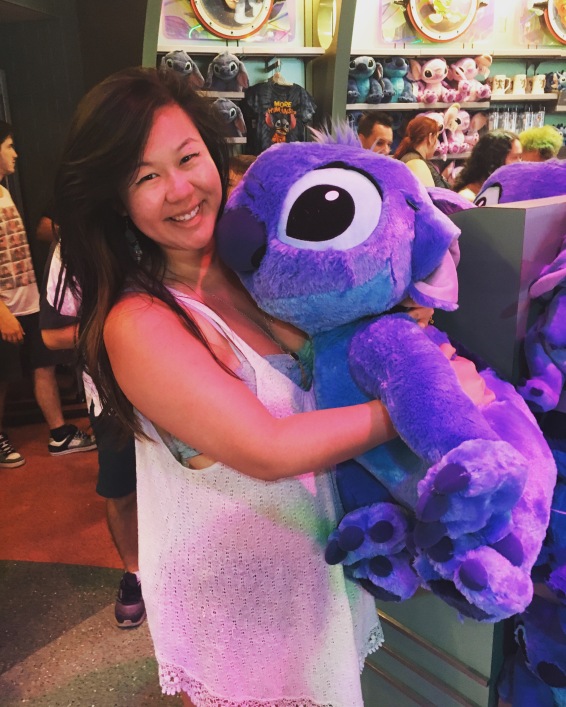 how can there be so much happiness in the world?

You really can’t do Disney on a budget, but we were so dedicated to going that we made the 6-hour round trip to Orlando! This saved us resort hotel money (but, apparently the resort experience is totally worth it- will go back SOON HOPEFULLY). We booked our tickets pretty last minute to Magic Kingdom, but now you can buy Disney tickets “off-peak” for cheaper alternatives. My company also had a 30% discount which I couldn’t take advantage of since we decided to go so last minute, but look into your benefits to see if you have a pass. You can also bring your own food and water into the park to save money- just no selfie sticks!

the hall of Princesses. We met Rapunzel and Cinderella!

with King Triton in a rainstorm.

the feeling after swirling around in Alice’s Teacups