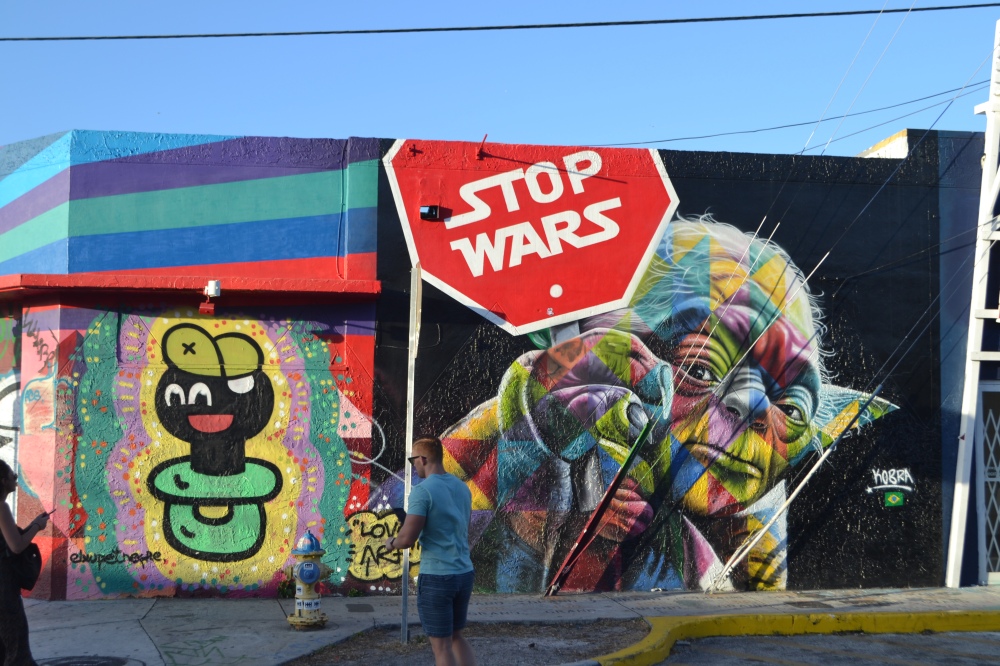 As previously mentioned, M and I are taking a bit of a travel hiatus this “semester” as our time away from our respective jobs will be spent on non-vacation trips: weddings, interviews, weekend class, etc – and as we save up for some upcoming ~ big things~ (like our month- long travel this upcoming summer!) But, I had a free weekend before my last (gasp!) semester of grad school officially kicked off, so I invited a few friends to escape the NY cold and celebrate my birthday a bit early (just an excuse to go to Miami, tbh….) This was a great last long-weekend getaway before hustling the next few months! Forewarning: this was NOT an budget trip…can’t remember the last time I spent more than a night in a hotel!…but the city can definitely be completed via an affordable trip if you’re looking to do different things. It was actually surprisingly pleasant taking a typical ‘girls trip’, complete with fancy food/brunches, dressing up, and relaxing by the beach/pool. 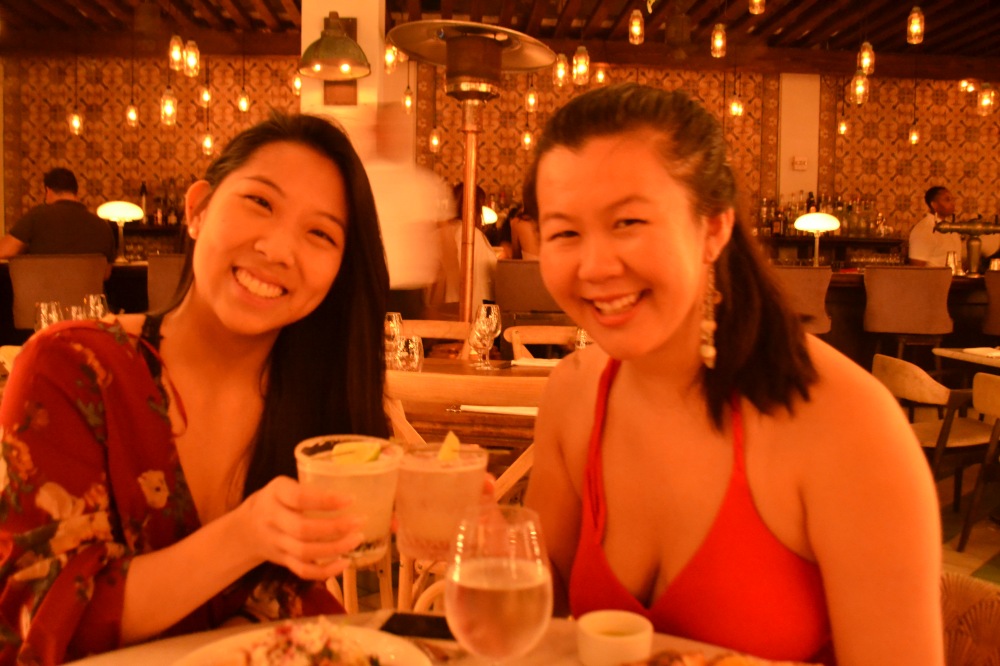 I met my friends in Miami as I was flying from a work trip in another city, but we instantly were welcomed by warm ocean air and palm trees on a balmy Friday night. Our hotel (mostly free, for three nights, as I had many points accumulated) was right on Miami Beach and at a relatively central location. We started off with a nice dinner at an adjacent restaurant/hotel (most of the restaurants we went to in Miami were housed in hotels, funnily enough) called Cecconi’s and spent the rest of the night at the jacuzzi and pool outside.

SH, RK, and I woke up at a decently early hour the next morning to spend as much time on the beach – right behind our hotel – as possible! While not a tropical paradise because of the commercial chairs and umbrellas hosted by the hotels on the beach, the water and sand were surprisingly clean and warm. If you’re trying to do Miami on a budget, you can easily spend most of your time at the beach and bring picnic foods/drinks throughout the day. 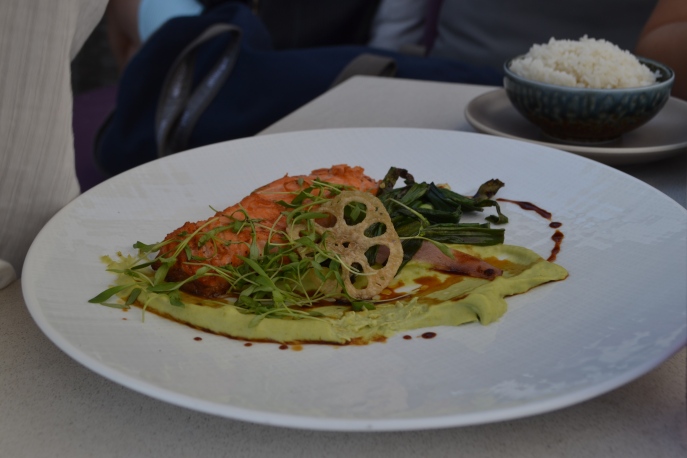 Instead, we brunched at Juvia, taking advantage of their well-priced prix fixe menu and skyline. Our next major activity of the day was paddleboarding through Miami Water Sports – I had found a very cheap Groupon for only $9 a person (usually Miami paddleboarding is $40-$50 an hour). We carried our boards and paddled around the harbor, and even swam with dolphins! Word of warning though, paddle-boarding is kinda hard, especially if you’ve never been before. Three of us struggled for a very long time to go against the tide back to land, while the other two were stranded on a private island out in the harbor….we had to beg the policeboat to help find them. Thanks, Miami Police, for the scenic ride to help rescue our friends! 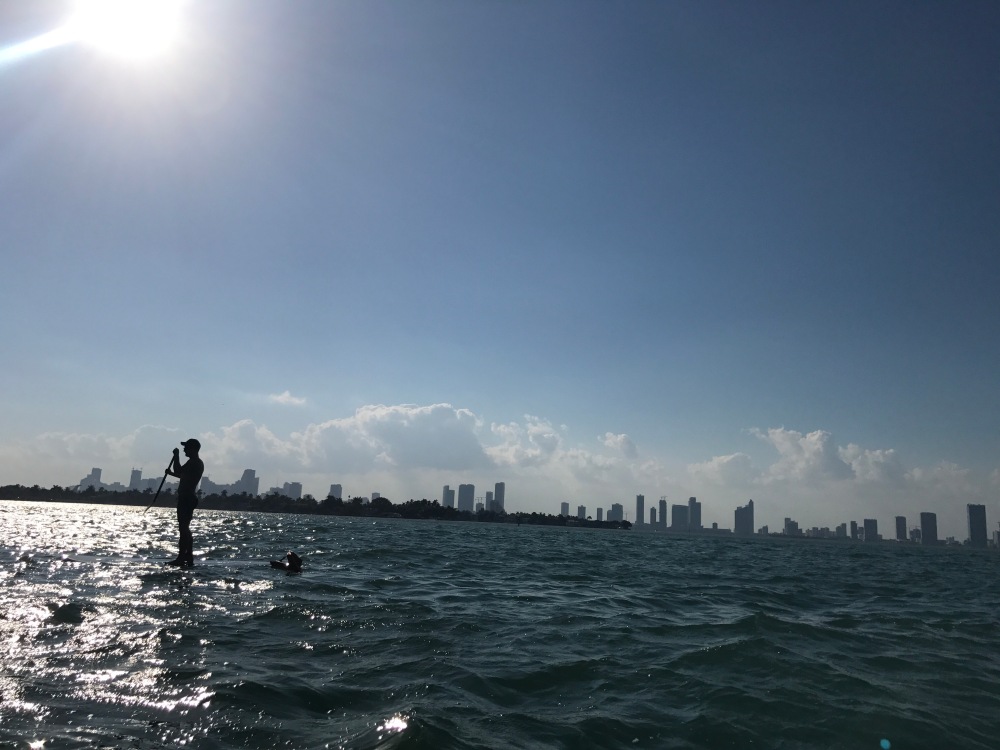 After the traumatic paddleboarding incident, we decided to head down to South Beach to take advantage of a bar JH really liked when she used to live in the city. At Wet Willies, mixed slushy drinks go for $11-$13 and are a surefire way to get your money’s worth of alcohol:  fan-favorite among our entire group!

Our evening was spent at a fancy dinner at the Versace Mansion (definitely NOT budget-friendly, thanks friends for my birthday dinner though!) before heading out to LIV Nightclub. We didn’t want to take the chance that we wouldn’t get admitted, so we’d bought tickets to the Steve Aoki concert beforehand, but many of the people I talked to either met promoters or just waited in line to get let into the venue! LIV was a great time though, and very close to our hotel.

The next day was more or less the same; we ventured down to South Beach in the morning for some beach time before meeting up with the rest of the group at Terrazza at the Shore Club for bottomless brunch. Sundays are Ladies’ Brunches, which means bottomless bellinis, mimosas, and sangrias for free in addition to our brunch price.  We were hoping to catch the infamous pool party (Shore Thing Sundays), but I think that might be a summer event only, so we spent a good chunk of the afternoon at South Beach instead. 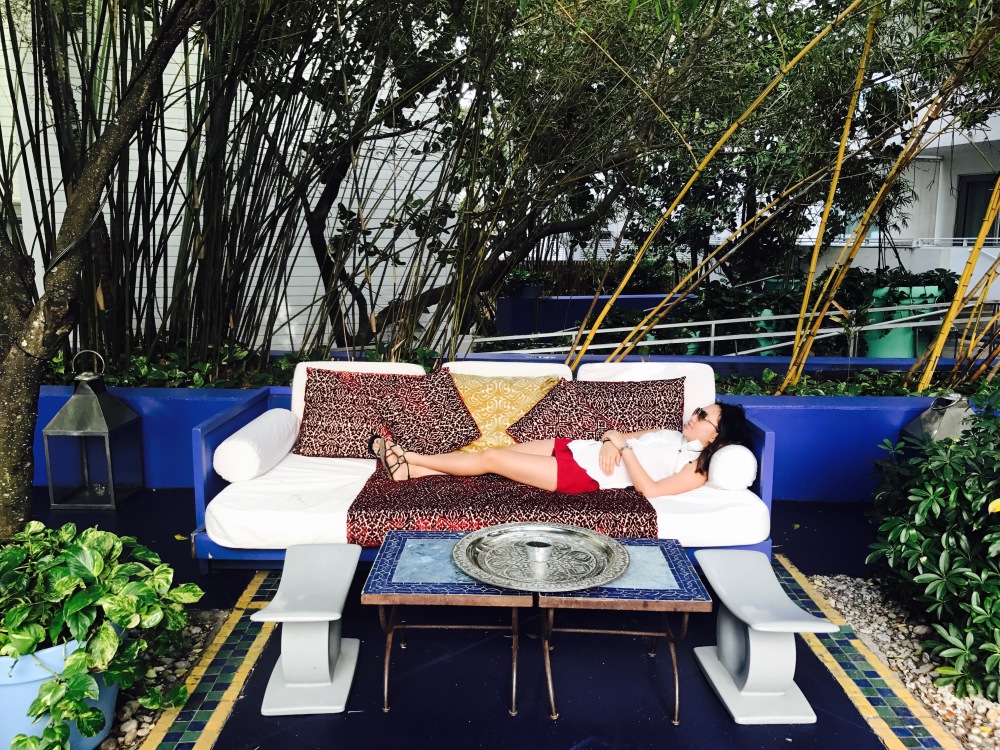 After brunch we finally ventured into downtown Miami and explored Wynwood Walls/Doors the rest of the afternoon. After a long walk to a bar we’d heard about from a friend before heading to Cleo for dinner. More overeating ensued, followed up by more pool/jacuzzi time. 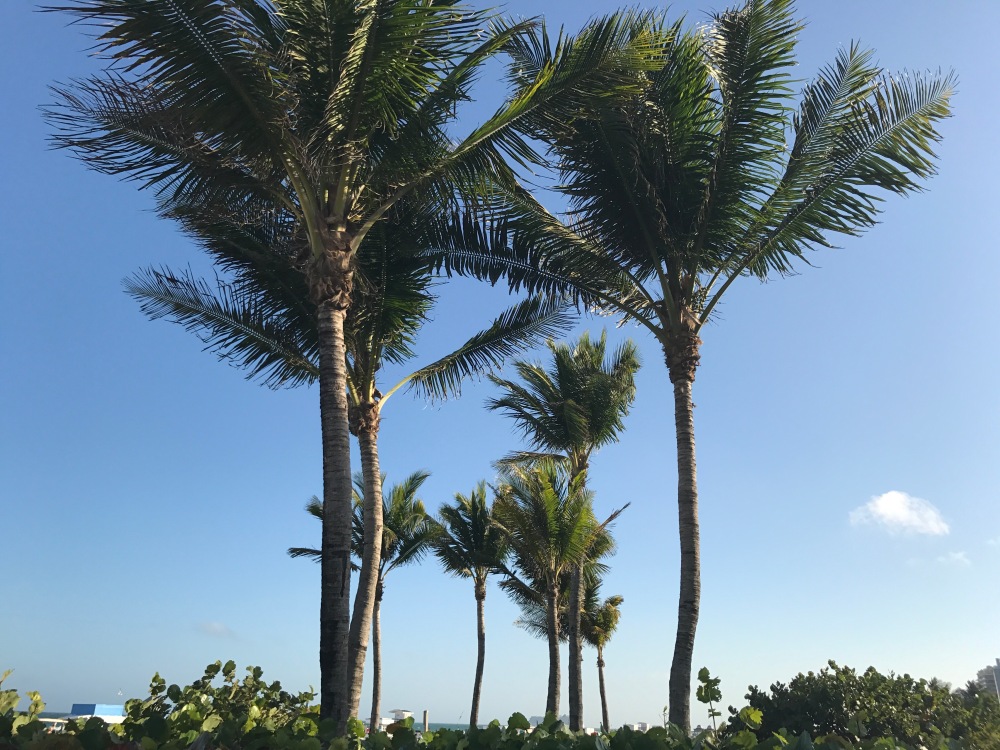 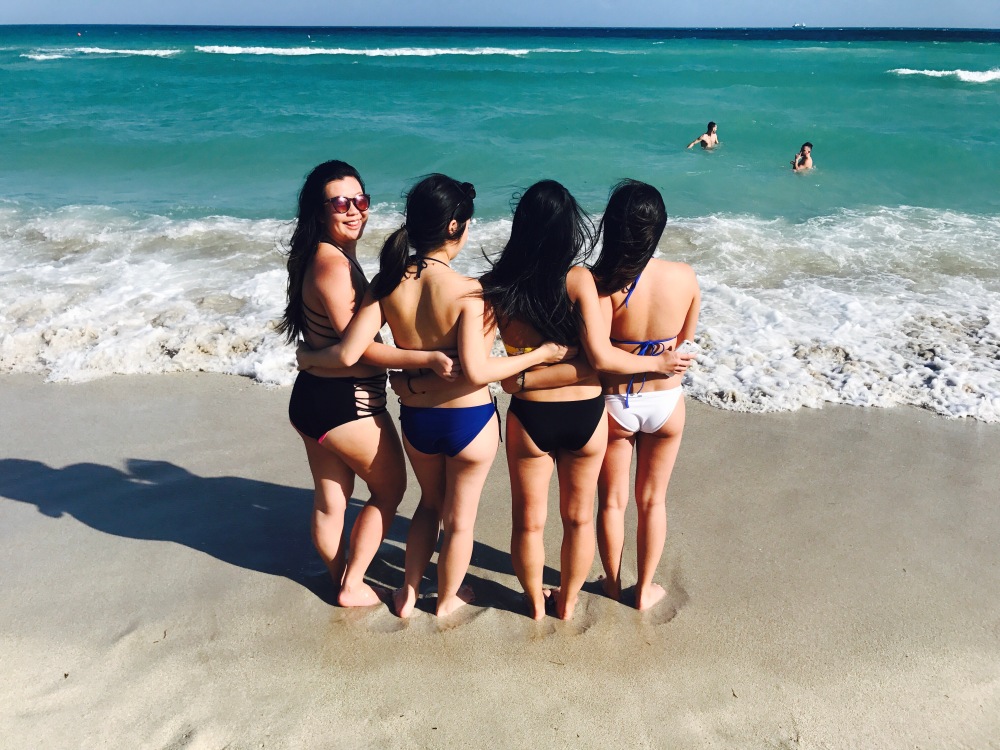 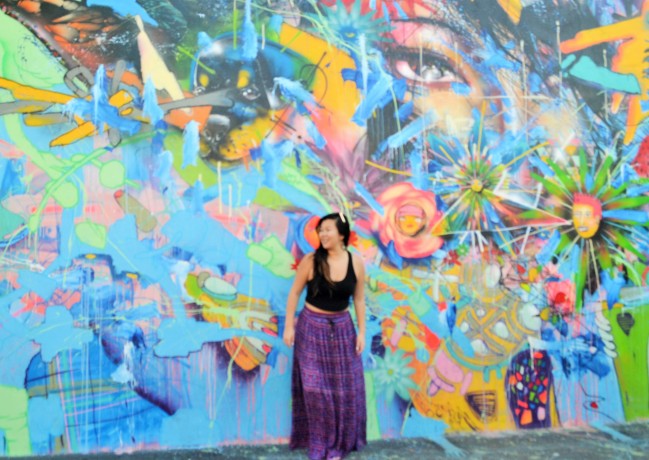 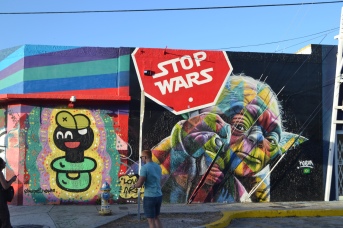 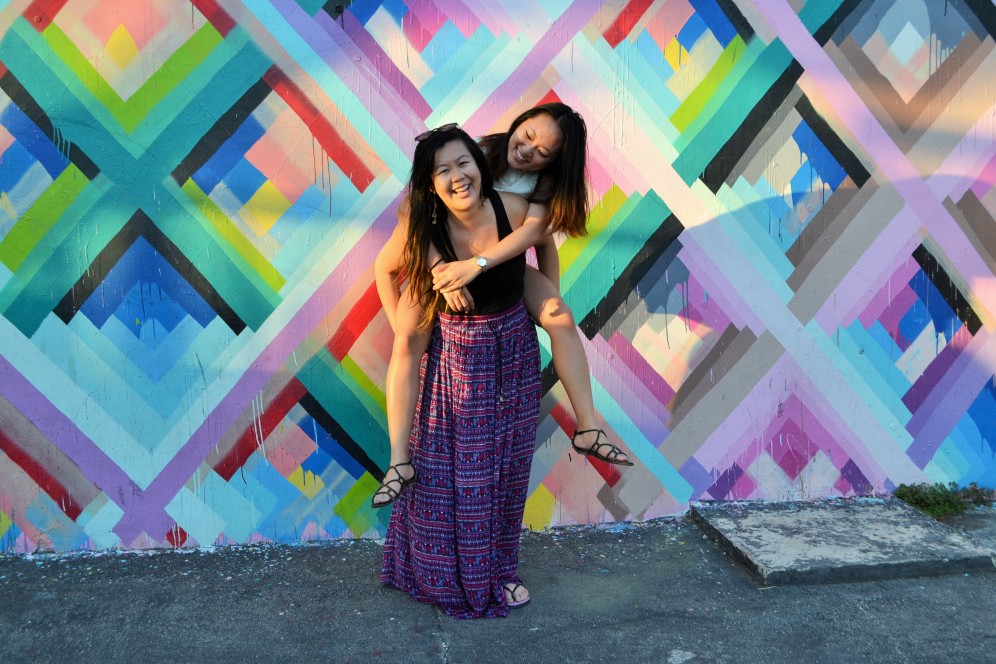 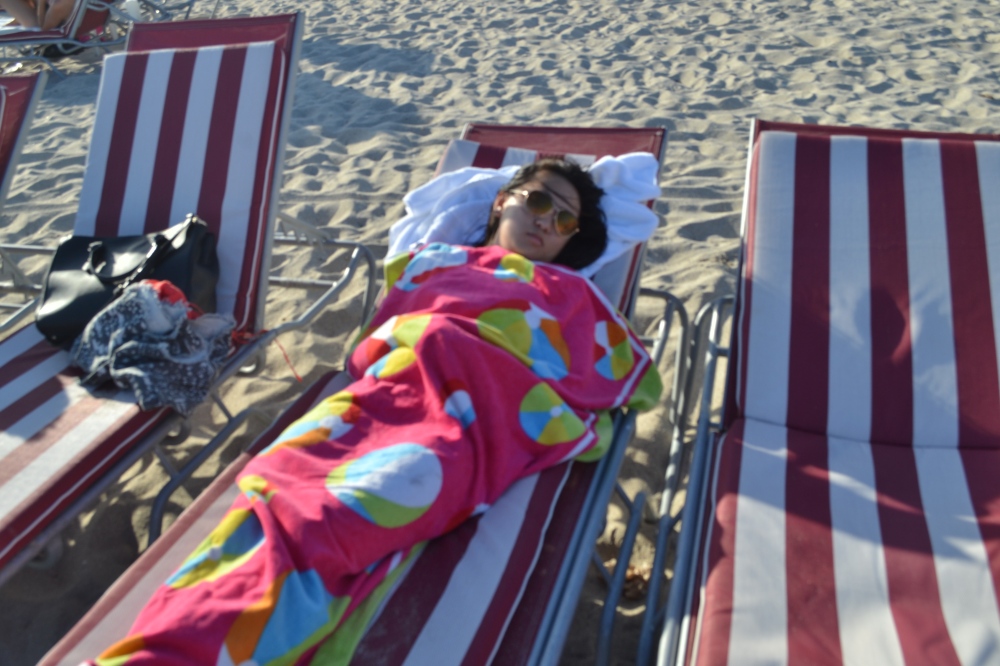 By the third day, two of our party had left already, leaving LP, JH, and me to explore the rest of the city. Together we did what I usually do on trips- cheap eats and cultural sites – which was a great way to round out the weekend. We ventured into Little Havana and tried Cuban food (and I bought some Cuban cigars as gifts!), then explored Vizcaya Museum & Gardens. 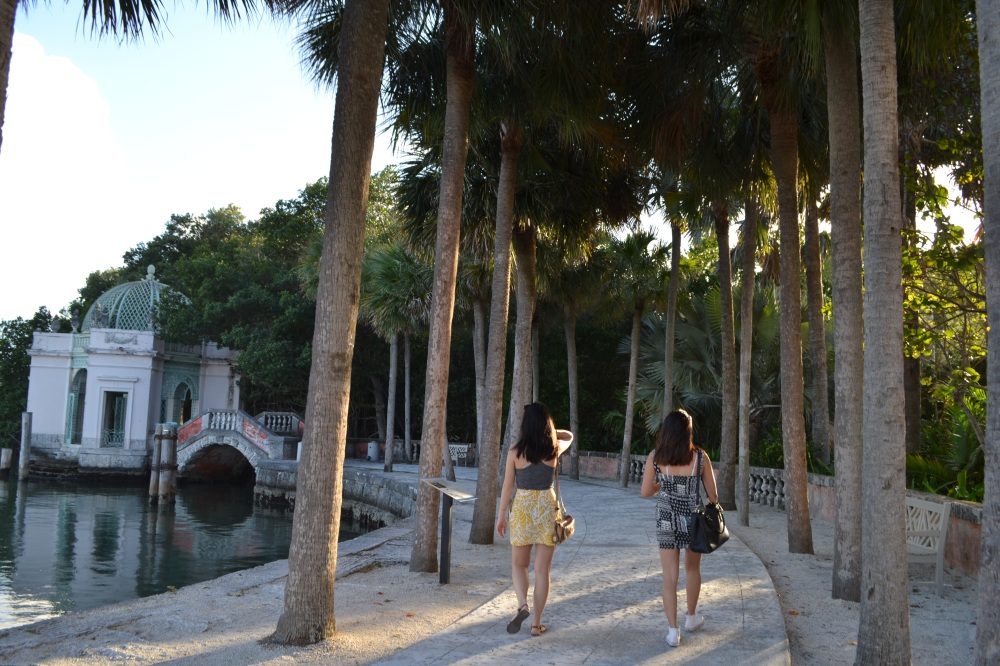 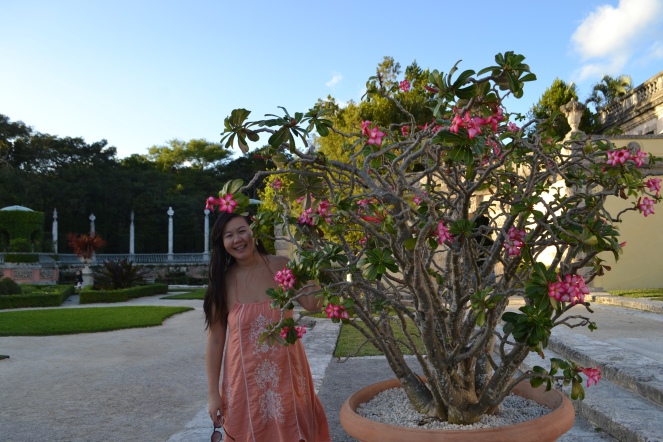 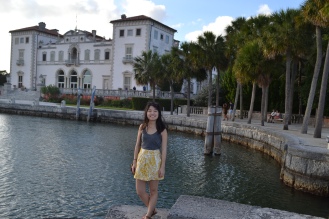 A final note: Uber Pools and Lyfts were VERY cheap – around $1.99 for an Uber Pool if you’re getting around Miami Beach. If you stick with beach, finding cheap eats/making your own food, and cultural sites, you can easily spend a budget weekend here!