My friend M (not husband M) and I just came back from a whirlwind week in Morocco. We were a little nervous going into it because we’d heard a lot of stories of getting lost or getting harassed, especially as two women traveling alone; thankfully, the reports were less intense than expected, but I did feel that the week was super chaotic and hectic. However, we did visit almost all of the highlights of Morocco that I wanted to visit, so I probably don’t need to ever visit again. 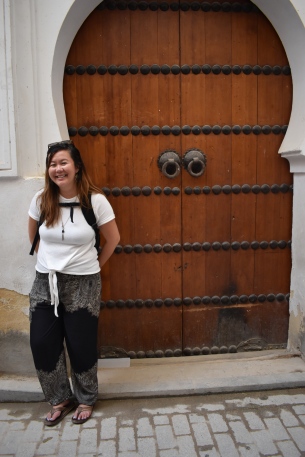 Instagram only shows one side of the picture – we had plenty of beautiful photos from our time in Morocco. And, there were some areas that were quite beautiful and we did have some great highlights – Chefchaoeun, for one,  and by the end of the trip I did enjoy Marrakesh quite a lot, especially after a session in a traditional hamman. However, many of the places we visited were heavily geared towards making a profit towards tourists, and as Asian women in particular we got harassed a LOT (never to the point where we felt unsafe, but we couldn’t walk 10 feet without people pointing and exclaiming “CHINA? JAPAN? KOREA?”, after which we would wearily shake our heads and say no.) 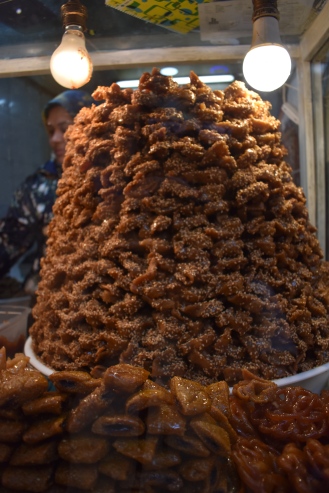 We flew into Fes from London, and easily flew through immigration. Our hotel manager/waitstaff/tour guide (seriously, he did everything) picked us up for 15 Euro, and we were on our way to our riad. We were so glad we arranged transport for us ahead of time, both to save ourselves from the inevitable haggling of fare prices for taxis but also so that someone could walk us from where the car dropped us off and our riad.

The way from the main plaza to our riad was actually pretty straightforward, but then after we settled in and started off the explore the city, we understood what everyone had talked about Fes being a MAZE. Firstly, google maps don’t work in the medina, and all the streets are windy and look more or less the same. Then, as we were walking through the city and doubled back, shops were closing for breaking fast, so we couldn’t use landmarks to help us mark our way. Vendors were pretty aggressive and the streets were pretty small and dark, so we didn’t feel comfortable stopping anywhere for more than a second, and we always pretended that we knew which direction we were going (although most of the time, we didn’t). We just wanted to make it to the Blue Gate on the other side of the medina, and eventually made it (pro tip, the signs around town have numbers which mark where you are – a fact I noticed too late). 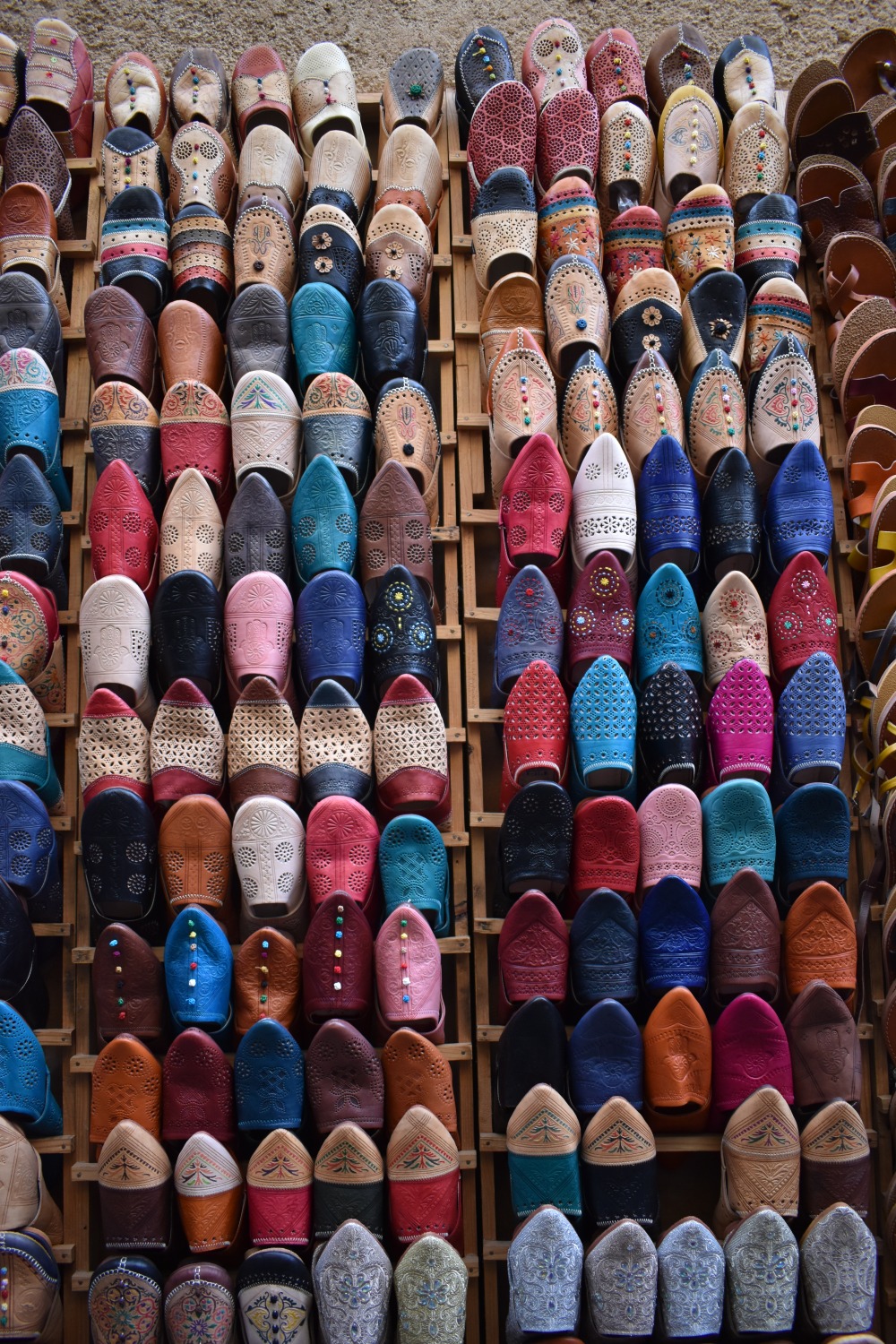 Everyone, including our hotel manager who had lived in Fes all his life, said not to go out in Fes after dark, so after our first half-day of wandering in the old medina we opted to have dinner in our Riad. Prices were pretty reasonable – around 9 euro for a 3 course meal with mint tea. Our hotel manager served us, and we actually had good wifi and comfortable beds even though the riad only cost around $20 a night.

For our second full day based in Fes, we wanted to take a day trip to Chefchaouen. Yes, a one-way trip to the Blue City was around 4 hours, but we figured it would be worth it. Our hotel manager tried to buy CTM bus tickets for us the night before, but they were all sold out, so we had to join a private tour (really just a driver who drove us, stopped at a few places, and met us after we walked around Chefchaouen). The tour was 44 Euro pp; a bit more than the bus tickets, but it did save us the hassle of navigating to the bus terminal and back to our riad at night. 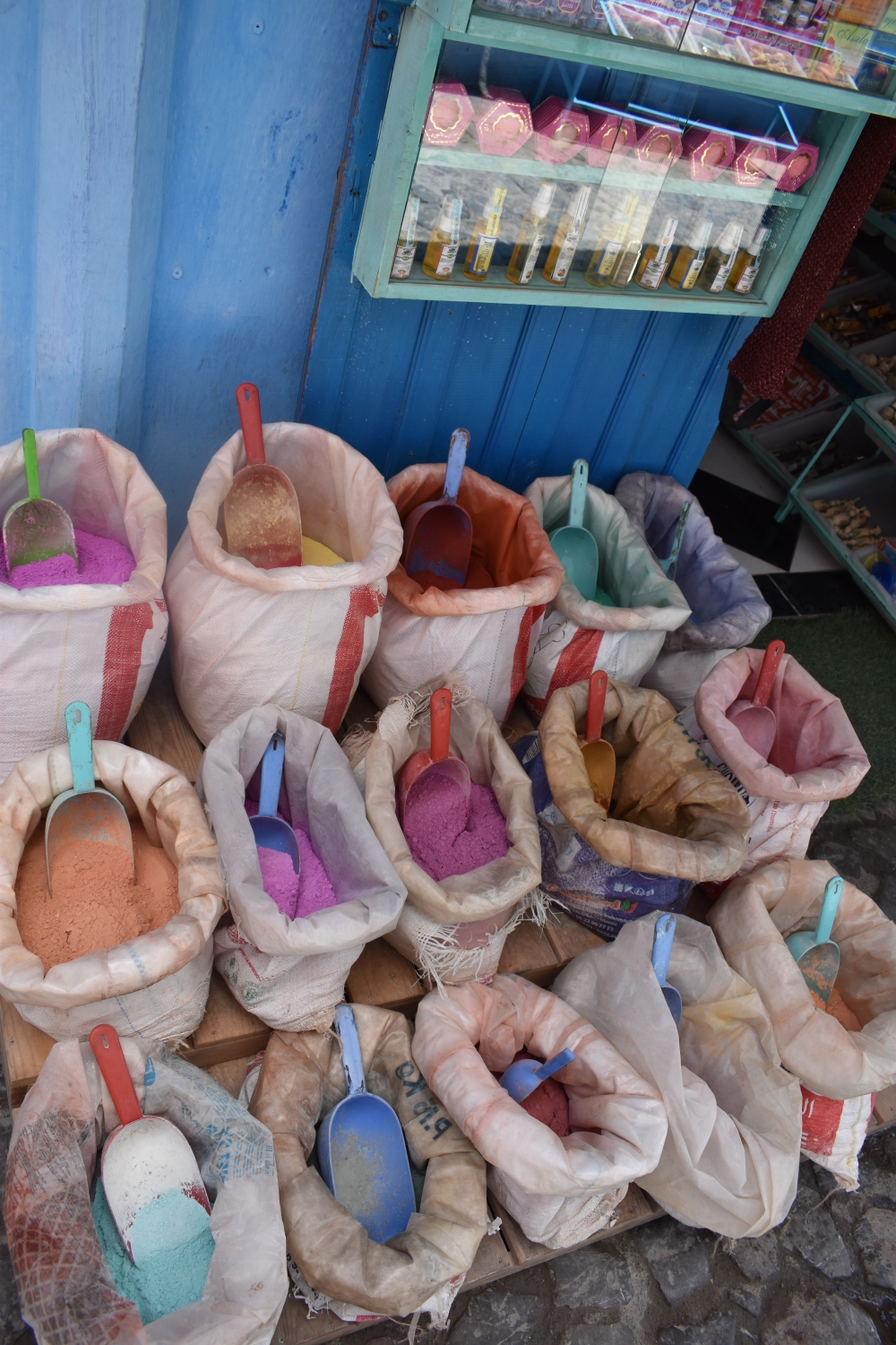 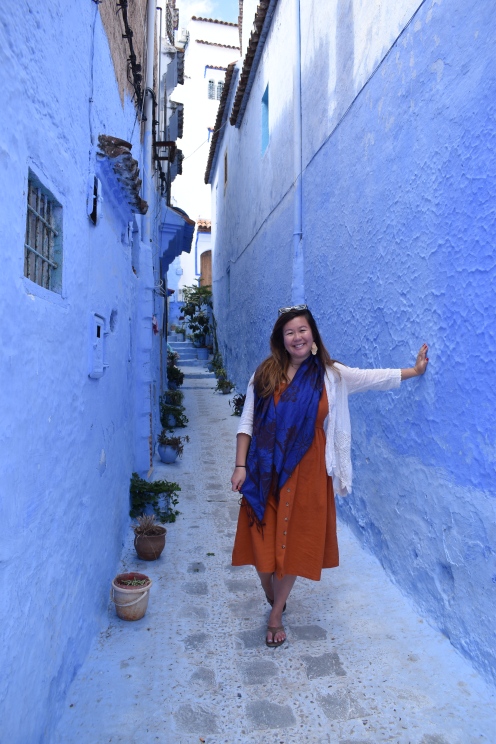 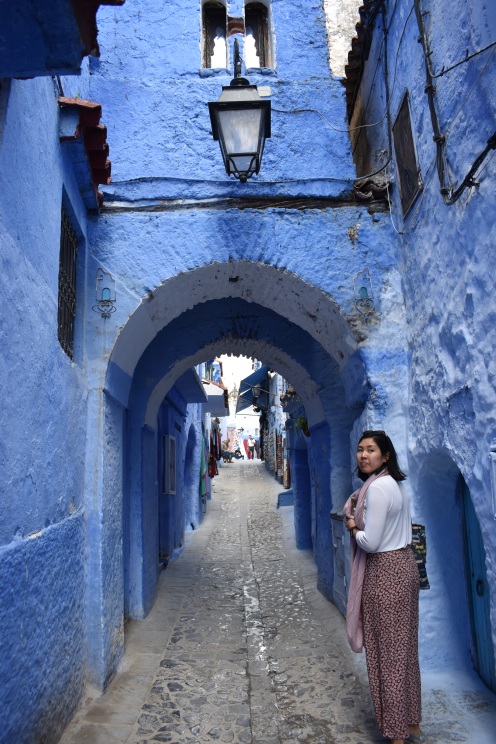 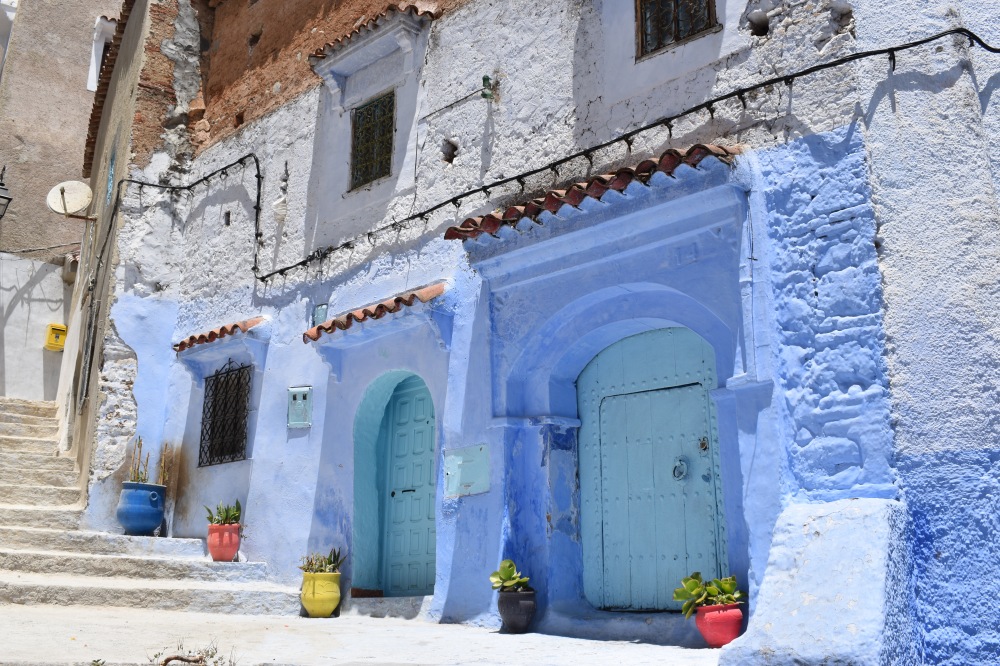 Chefchaouen was a beautiful blue city, which apparently is blue because the Jewish were the last to settle there and made it so. We felt that walking around was much safer than in Fes, and the vendors were not quite as aggressive. We simply enjoyed walking around and taking photos of the beautiful corners and colorful pots. 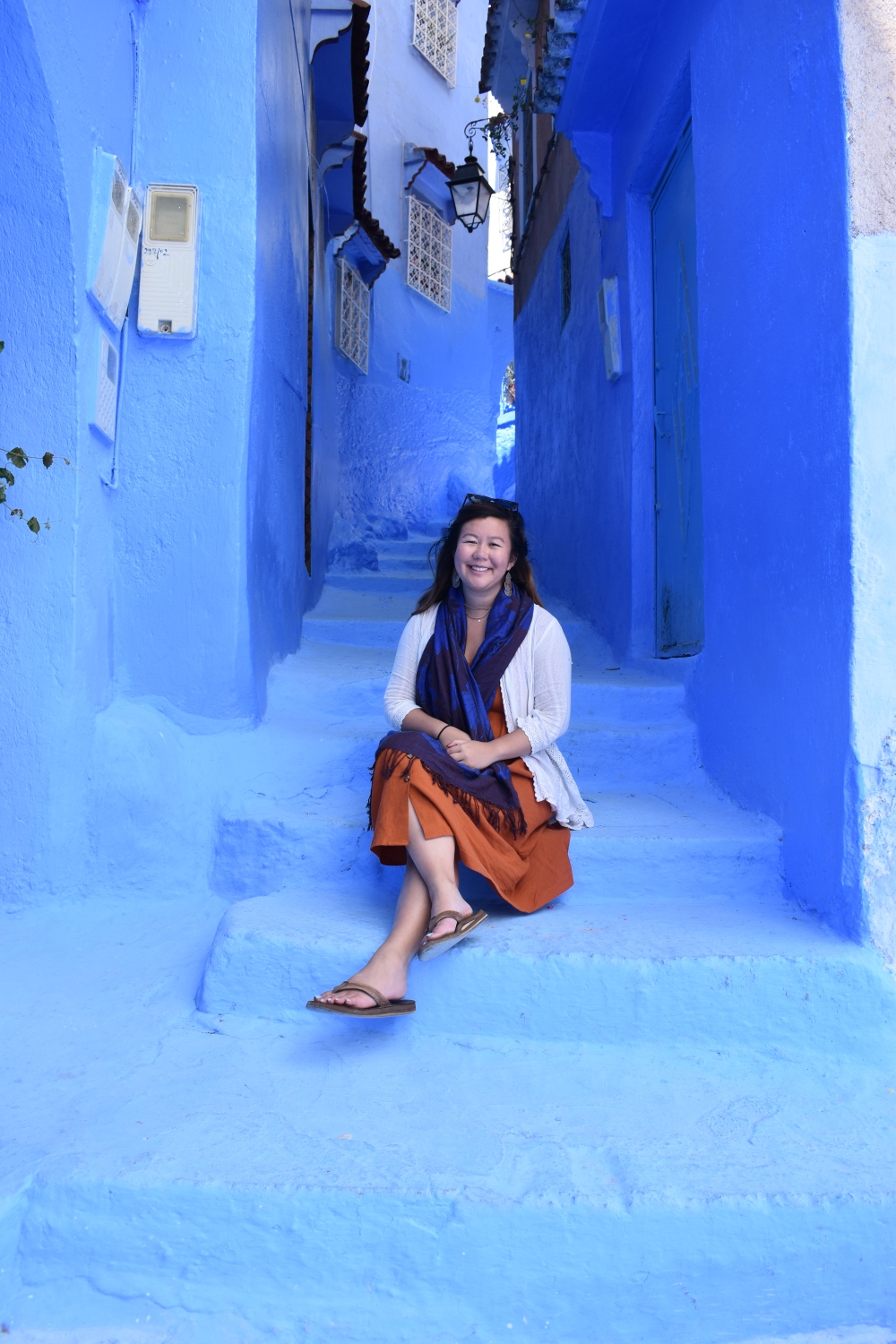 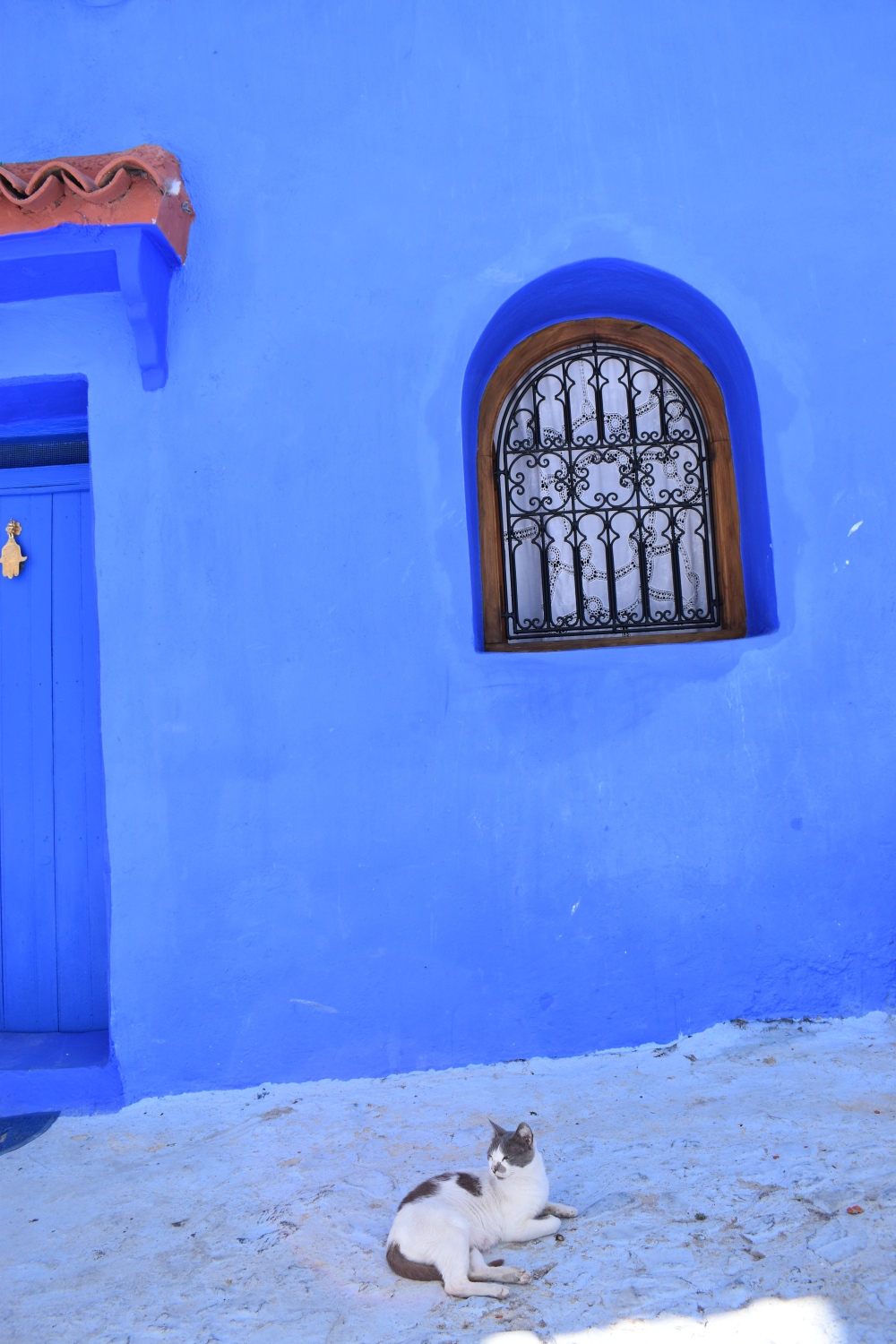 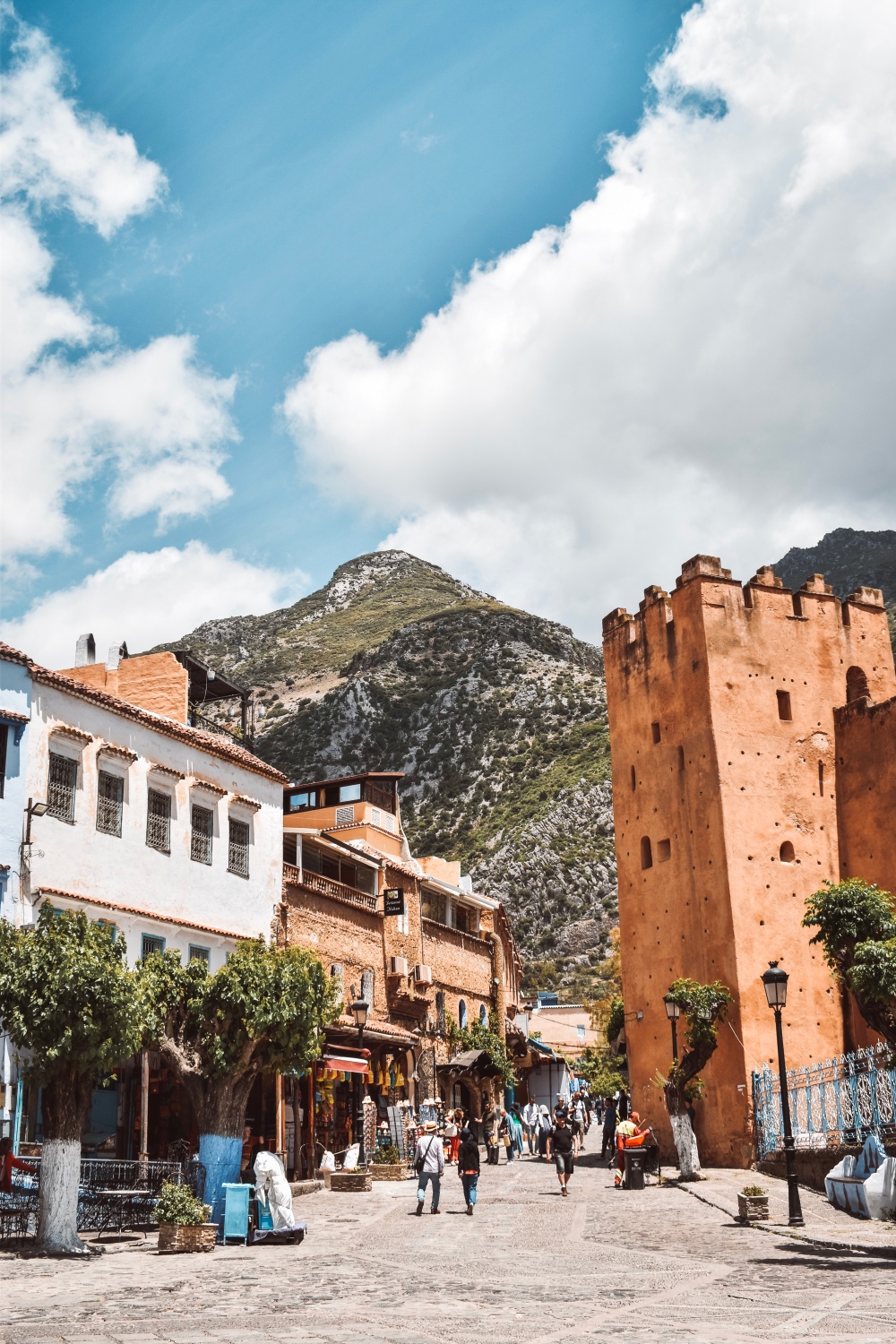 The city was much smaller than Fes, with only a few places for lunch. We stopped at a recommended restaurant with terrace views for lunch, and while they had few vegetarian options for M and very few other options, but they did have lamb tagine which I think was my favorite meal of the trip.

We arrived back in Fes after a few hours of wandering around Chefchaouen, then another 4 hour car ride. The next morning, we went to meet our drive to take us on a tour of Morocco’s countryside on the way to the Sahara – thankfully, we’d gotten a bit used to driving long distances with our day trip to Chefchaouen…and the driving had just begun. 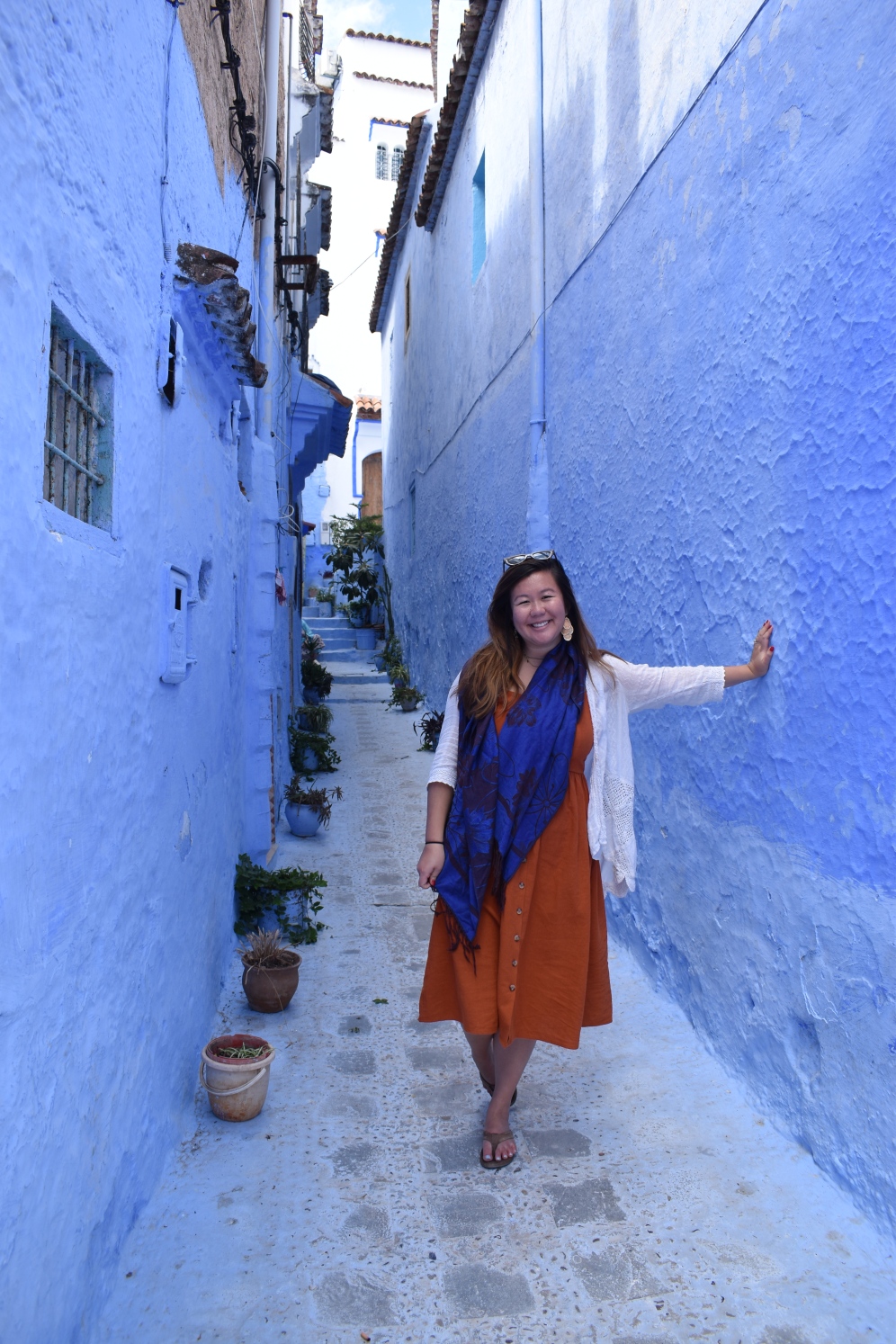 TO BE CONTINUED with the second portion of our trip: the Sahara Desert tour! 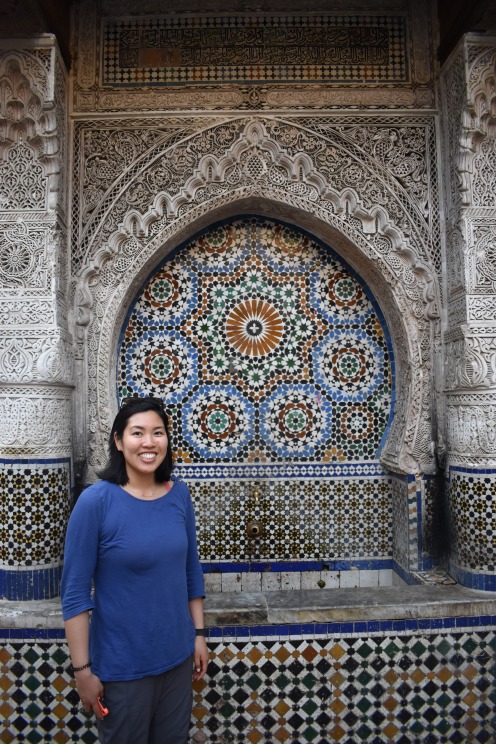